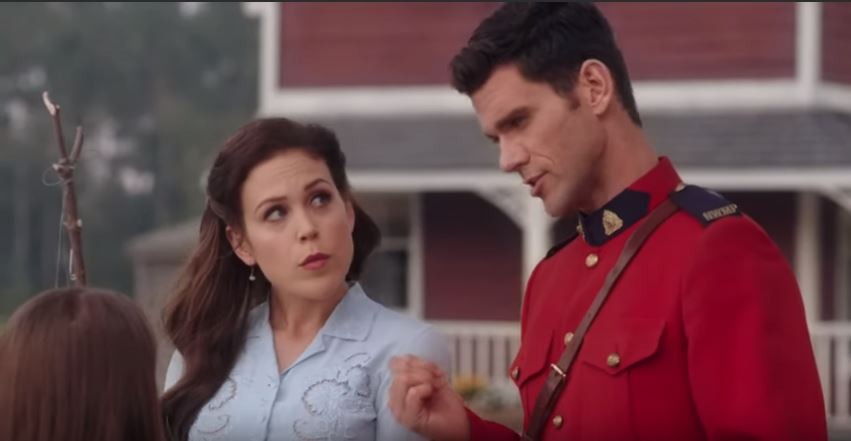 The fans of When Calls the Heart knew that Lori Loughlin would not be in Episode 5. After the big college scandal, she was written out of the show. If you watched Hallmark, they simply said that she left town to take care of her ill mother. If you bought the episode on Amazon, you noticed that Lori was still in it. They even showed her in the opening credits. This episode can be watched on Amazon for $2.99.

On the Hallmark version, they had Elizabeth read from her journal explaining what went on. Here is what she had to say about it.

“It’s been a week since Abigail got word that her mother had taken ill back east. True to her nature, Abigail wasted no time in rushing off to take care of her. Abigail is much more than a friend. She’s family and I will miss her and Cody deeply. We all will. But we must get by as best we can.”

Lori Loughlin continues on the show

The show went on as normal on Amazon. Lori Loughlin’s character Abigail is seen meeting the new Mountie in town. She is shocked he came into town a bit early. Abigail goes on to explain that the town lost Jack Thorton, which the new Mountie already knows. He also comments on how he needs to speak to Elizabeth at some point.

#Hearties, we're so excited to share an exclusive first look at returning to Hope Valley! Watch now, and join us for the When Calls the Heart special two-night premiere event this Sunday at 9pm/8c and Monday at 8pm/7c. pic.twitter.com/Pz1GSrikOI

The new Mountie Nathan ate at the cafe and enjoyed his meal. The two got to know each other and then things went on with normal chaos in Hope Valley. Elizabeth saw the new Mountie and was in a bit of shock. Her good friend Abigail was there to explain she knew he was coming just not how soon. She was there for her good friend as always.

Abigal was even seen talking to the sheriff about a stagecoach robbery that occurred. This is not something Hope Valley is used to happening in their town. Rosemary even called Abigail on the phone that is supposed to be only for emergencies. Rosemary doesn’t seem to understand what an emergency is and is using the phone often. The Sheriff and Abigail also had a talk about the new Mountie and how this could affect Elizabeth.

Clara seems to be replacing Abigail in at least one of these scenes. Maybe this is a hint that Clara and Elizabeth will become close now that she doesn’t have Abigail by her side.

The show must go on

The show When Calls the Heart must go on without Lori Loughlin. One big change that they made was that her adopted son Cody left town with her as well. Some of the fans are pretty upset that Cody was written out of the show as well. This young actor didn’t do anything wrong, but he somehow lost his role on the show as well.

It doesn’t look like Lori Loughlin will be back, but you never know what Hallmark will do. She still has a trial to go through and is innocent until proven guilty.

Were you shocked that When Calls the Heart on Amazon didn’t take out Lori Loughlin? Share your thoughts in the comments below. Don’t miss new episodes of WCTH on Sundays on Hallmark. Don’t forget that another new episode will air tonight as well.

YIKES! Ivy Seewald In Least Likely Place Guzzling Out Of A Jug
‘Siesta Key’ Season 4, Episode 5 Not On This Week & Here’s Why
Danielle Busby Has Mixed Feelings As She Leaves Blayke Behind?
Rivers Waldrop Rushed To Hospital After Nasty Fall
Blu Waldrop Gives Up Favorite Boots For Bigger & Better? [See Pics]