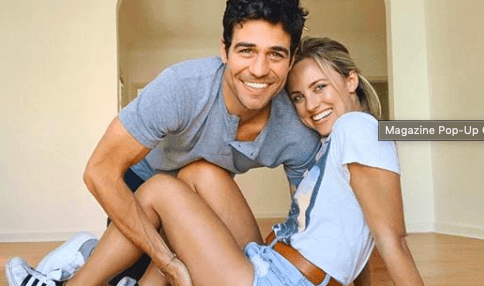 One of the fan favorite Bachelor in Paradise couples has finally taken a huge and long awaited step in their relationship. Joe Amabile (AKA Grocery Store Joe) and Kendall Long have finally moved in together. They even posted adorable photos. They show just how cute they are and how nice their new house really is.

‘Bachelor in Paradise’ Couple Living Together

Both Joe Amabile and Kendall Long met on Bachelor in Paradise. Despite Kendall straying a little during the last season, they have stayed happily together since. Even when Joe starred on Dancing with the Stars. According to Life and Style the two have finally signed a lease together.

Both the Bachelor Nation stars posted about their new journey on Instagram. Kendall says they are located in West Hollywood. Talk about a glamorous place to live together!

Joe’s post was a little more comical saying they should probably buy furniture now. Its evident from the photo the place is pretty empty. However, from what can be seen it looks like it’s a pretty nice place to live. After all they are in West Hollywood. They probably had some money saved up before making this huge decision.

We finally got a place together!! Now we should probably buy some furniture

The couple looks cute as ever in the posts. Looking at their Instagram accounts, they seem to be living life and having ton of fun together. Their relationship  has been so cute and they are both a little weird. This makes them perfect for each other. Hopefully we can all find our Grocery Store Joe some day. Move over Prince Charming!

Is Marriage in the Stars future?

The next question is, when will they get engaged. In Kendall’s caption she talks about starting a life with Joe. Could this mean an engagement is in their future? They would probably have and adorable wedding and let’s not even get started on how cute their kids will be. Oh well, one step at a time!