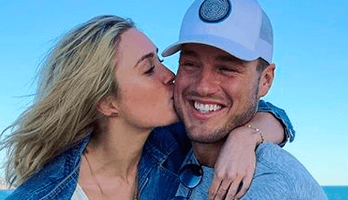 It’s been a little while since the end of Colton Underwood and Cassie Randolph’s season of The Bachelor. It’s obvious the two are in love with each other and plan to stay together long-term. There’s a good chance they will be getting married in the near future too. Underwood was recently spotted shopping in Los Angeles and might have picked up a ring while he was there.

As of right now, an engagement has yet to be announced. The couple has made it clear that they do plan to tie the knot eventually. They seem like they are taking things slow. This has raised some questions among Bachelor fans. Specifically, fans are wondering why the couple has yet to move in with each other.

Because the two are committed and in love, fans believe it makes sense for them to move in together. After all, they are planning on getting married soon enough. Plus, they both already live in Hollywood so it wouldn’t be a huge move. It turns out that they have a good reason to live separately for now.

Why have Colton Underwood and Cassie Randolph decided not to live together?

Recently, Underwood decided to clear this up. He spoke with Extra and said, “I don’t think you realize how many important steps you miss in the Bachelor process, which is nothing against them. We want to make sure we do this the right way. Statistically speaking, for Bachelors, it’s not very good odds, so I think us going against what other Bachelor and Bachelorette couples have done is probably going to work out in our favor.”

Based on what we’ve seen from past Bachelor and Bachelorette couples, we definitely understand where they’re coming from. They also want to make sure they have time for themselves. Underwood explained this saying, “We both feel like… living our separate lives but still coming together at the end of the day is what’s most important for us and what’s the right step for where we’re at in our relationship.”

Of course, once the couple decides it’s time for that next step, they will move in with each other. With their plan to move forward slowly, we have no doubts that their relationship will last a while. They seem to know what they’re doing. Fans are hoping for a wedding from this sweet couple soon.

here’s to making more memories with you ❤️

What do you hope to see from Colton and Cassie in the future? For more updates about the stars from The Bachelor, be sure to check TV Shows Ace often!