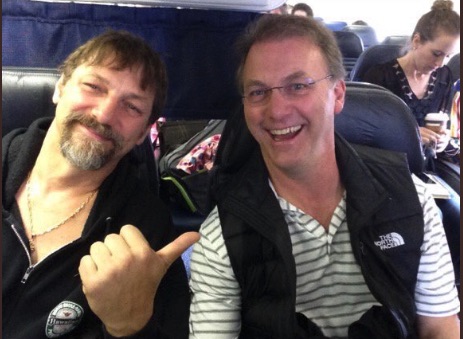 The first two Deadliest Catch 2019 episodes have now been aired, without any trace of the popular Time Bandit or Captain Johnathan Hillstrand. Will the fan favorite boat return for Season 15 or in the future season of the Deadliest Catch? This is what we know now.

Captain Johnathan Hillstrand went to Twitter to post one of his “Crab Facts” videos. Instead of talking about crab fishing, he discussed how many days of life we get to live. He was very philosophical about how we should enjoy each and every day, and that even if we live until 100, that is really not that many days. He never discussed retiring, yet it was clear that he had been thinking about his life and he wants to enjoy it.

Deadliest Catch fans may even read into his video as being an explanation as to why the Time Bandit is up for sale. Others may look at this video and realize that the newly married Captain John may want to focus on time with his wife, Heather Hamilton, and not go out fishing in the cold Bering Sea.

The Time Bandit Is Up For Sale

Fans have been asking about the Time Bandit and why they are not part of Season 15. These Deadliest Catch fans may be surprised to learn that the Time Bandit is up for sale. TMZ had reported that the boat was priced at $2,888,888, yet, there was no official statement from the Hillstrand family about the sale of the boat. As of now, it does not appear that anyone has purchased “the boat that steals time.”

Should someone purchase the boat, would they join the Deadliest Catch? They would have a lot to live up to. The Hillstrands were so popular with their pranks, their fireworks and their larger than life personalities.

The Time Bandit Is Part of Neal Hillstrand’s Divorce Settlement

There had been no hint that the Time Bandit would be up for sale, despite Captain Johnathan announcing that they could not go King Crab fishing because of a blown engine. There had even been talk that Discovery would put cameras on the boat and that Captain Johnathan would return to the show.

What should have given Deadliest Catch fans a hint that the fabled fishing boat was for sale was in Neal Hillstrand’s divorce from his wife Sugayle Marie Hillstrand. In the divorce settlement, Sugayle was to receive $10,000 should the boat be sold.

In the summer of 2017, a former crew member sued the Hillstrand’s. This was for the loss of the use of one of his hands. According to Seattle PI, David “Beaver” Zelinski had been holding a launcher while a Time Bandit-brand firecracker exploded inside. Captain Andy Hillstrand had been in charge at that time. He had called the order for Zelinski to fire the firecracker. The longtime crabber had many surgeries on his hand and forearm. He was never going to be able to work on a crab boat ever again.

The jury determined an award of $2.7 million but only recommended that the fisherman get half. They determined he was half responsible for this accident. Even at half, along with attorney fees, the Hillstrands had to fork out a big chunk of change to deal with this tragedy aboard the Time Bandit. In addition, the crew member is working at factory, making $50 an hour.