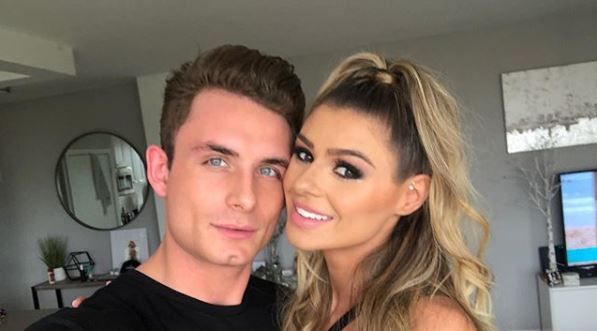 Wedding bells are in the air for the stars of Vanderpump Rules. Jax Taylor and Brittany Cartwright are tying the knot later this summer. Katie Maloney finally wrangled Tom Schwartz into marrying her two seasons ago. Tom Sandoval and longtime girlfriend Ariana Madix recently bought a house together. For now, Ariana is saying she will never get married.

James could be next

With so many weddings on the show, fans often wonder who will be next to walk down the aisle. James Kennedy was asked during a recent appearance on Watch What Happens Live if he planned to propose to Raquel in the near future. James responded with, “You know, she’s definitely the one if there is one, so soon, for sure.” He then blew Raquel an on-air kiss and declared that he loved her.

That’s not his first public declaration of his hope to marry Raquel. Before the current season premiere in 2018, Hollywood Life asked James if he planned to propose soon. James replied that he was “very in love” with Raquel and if he does get married, he hopes it is to her. These two are still going strong.

James Kennedy says she is the one

In November, he told the same media outlet that Raquel was “the one. For sure.” However, he also noted that he’s, “a lot younger than most of the cast.” Jax, Brittany, the two Toms, Katie and Ariana are all in the mid-to-late 30s, though they act like teenagers sometimes. James has been quite vocal on the show about wanting to have kids and a family someday. Unlike Ariana, who professes that she never wants to have children.

While Raquel and James aren’t house-hunting yet, they did recently move in together after Raquel graduated from college. She has a degree in kinesiology and also works as a fashion model. She walked in the Paris Fashion Week amid rumors that James had cheated on her.

Viewers know that James was previously accused of cheating on Raquel with a girl named Hope, among other women. Raquel has always chosen to believe James when he denied the allegations, especially when Kristen Doute was involved in bringing one of them forward. Kristen dated James shortly before he met Raquel.

In fact, Jax once started a rumor that James and Kristen hooked up during the last trip to Mexico. Kristen still denies this, but James admitted it (sort of) and then took it back. So, that is one cheating scandal that is still unconfirmed, much like Jax hooking up with Lala Kent.

There is always a cheating scandal with someone on this cast. Check out Vanderpump Rules Mondays on Bravo to find out who is cheating and who isn’t. You know if James does propose the cameras will catch it.