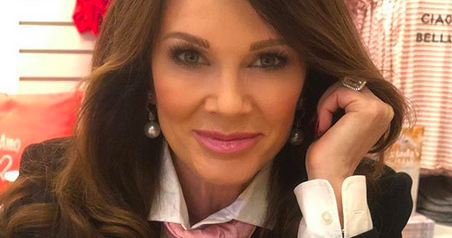 This comes as somewhat of a shock. According to Andy Cohen, the Vanderpump Rules reunion was “crazy”. Jax Taylor shared about the reunion and said, “This is the worst/best reunion we have ever had, the amount of all-out brawls and we are only halfway through. I had no idea it was going to go this way. None.”‘

From what it sounds like, it doesn’t seem like the stars would be on great terms with one another. Still, they came out to support LVP with her newest lounge in Las Vegas. Overall, it seems like the grand opening was a success. The reality TV stars seemed to get along. So far, we haven’t heard of anything major going down at the event.

At the event, Lisa Vanderpump spoke to Bravo’s The Feast about the special event. She told them,

“We painted the town pink! It was a surprise to [even] me — we had the Vanderpump Rules reunion in L.A., otherwise I would have been here yesterday. And when I came in this morning I saw the fountains were pink and my picture is on every billboard — and it’s wonderful! Caesars has been incredibly supportive of this whole project and I think they’re very excited by it.”

The grand opening for Lisa Vanderpump’s new cocktail garden was on March 30. This event required an invitation to attend. Of course, her husband Ken Todd and daughter Pandora Vanderpump Sabo were there.

Among those who attended were some of her co-stars from Vanderpump Rules. This included Tom Schwartz, Tom Sandoval, Lala Kent, Jax Taylor, Brittany Cartwright, and Stassi Schroeder. Stassi Schroder’s boyfriend Beau Clark tagged along and so did Lala Kent’s fiancé Randall Emmett. Camille Grammer was there as well.

Throughout the event, Lisa Vanderpump’s guests were sharing pictures on their Instagram stories. It looks like it had a great turnout! It seems like the gathering turned out much differently than the Vanderpump Rules reunion did!

What are your thoughts on Lisa Vanderpump’s new cocktail garden? Are you surprised that the Vanderpump Rules cast showed up?

Be sure to watch Vanderpump Rules on Monday nights at 9pm EST on Bravo! Check TV Shows Ace for more reality TV news!