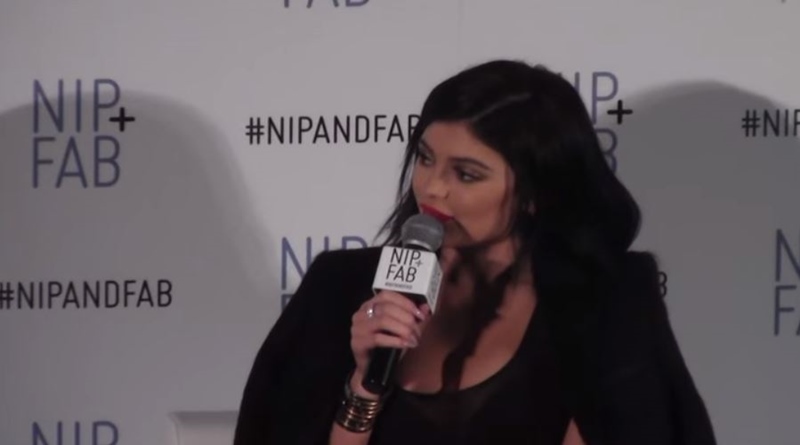 KUWTK  fans noticed that the price of the Lip Kit, that Jordyn Woods inspired got slashed. Obviously, they assumed that Kylie Jenner slashed it after the big Tristan Thompson – Jordyn drama. For fans, it’s not beyond belief that Kylie did exactly that following the mega-bust up with the Kardashian clan. However, Kylie denies that she gave any orders to reduce the price.

KUWTK fans hear the Kylie Jenner would never be so mean

The New York Times (NYT) reported on March 30, that Kylie replied to a few questions about the Jordy Lip Kit. Fans of the Kardashians know the Lip Kit carried the Joryn Woods name because the two women nurtured a deep friendship for years. US Weekly reported back in February that sources revealed Khloé Kardashian’s guy, Tristan Thompson, kissed Jordyn. Apparently a dry and chaste kiss with no “tongue” involved, that didn’t stop the entire KUWTK family from hitting new heights of rage.

Woods told her side of the story to Jada Pinkett Smith on her Facebook Watch show Red Table Talk. Allegedly that just made the KarJenners angrier. Jordyn went to the UK to do some of her own promos, the price dropped, yeah – fans didn’t need a lot of convincing Kylie acted out of spite. Speaking to NYT‘s reporter Amy Chozick, Kylie denied lowering any prices for the Lip Kit in the wake of the drama. In fact, she said that she really had no idea about the lowered prices. Apparently, it all came out as a huge coincidence that the packing changed and the price cut reflected that. Kylie added that she called an employee to find out what happened.

Kylie said to the NYT, “This is just not my character. I would never do something like that and when I saw it, I was like, thrown back. Jordyn knows I didn’t actually put it on sale.”

Fans wonder about the timing of the Joryn Woods’ drama

With the new Keeping Up With the Kardashians season fast approaching, fans wondered if the drama really happened or got manufactured. KUWTK still pulls in great ratings, but without all the drama, the show could slide downhill. The spark of that rumor came with the release of the latest trailer for the upcoming season. In it, we hear Khloe crying and yelling into a phone saying, “My family was ruined!”

Well, we didn’t need the trailer to tell us that, as it was all over social media. Even though apparently, the footage of Khloe yelling and crying is from the previous time Tristan cheated, fans still speculate. For them, it appears related to the Woods’ clash that happened so recently!

Over on social media, fans of KUWTK split into team Jordyn and team Kardashian over the whole story. Whether the story’s contrived or not, they’re bound to flock to their screens to watch the new season of high drama in the show. What do you think about Kylie Jenner denying she slashed the Lip Kit price that Jordyn Woods inspired? Do you think it was all just a coincidence? Shout out your thoughts in the comments below.

Remember to stay in touch with TV Shows Ace for more news about Keeping Up with the Kardashians.  The new season of KUWTK premieres March 31 at 9 p.m. ET on E!