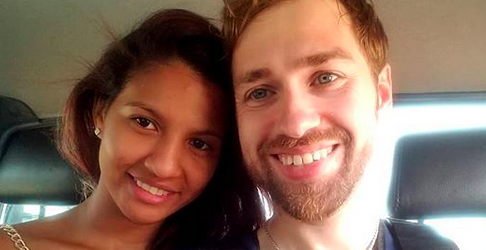 90 Day Fiancé stars Paul and Karine Staehle have welcomed their first child into the world. TLC shared a picture of the new baby on Monday.

A new #90DayFiance baby! 🍼Paul and Karine have welcomed their baby boy. Visit TLCme.com for all the details.

Their baby was born on March 22 at 3:20 pm in Manaus, Brazil. The couple decided to name him Pierre Martins Staehle. He weighs 6.9lbs and is 19.7 inches long.

The couple spoke with TLC about the delivery and shared some information about their new baby. In the interview, Paul Staehle said:

“I’m very happy, very excited. I’m also very nervous and want to do everything the best that I can and do everything right. Everyone keeps asking how it feels to be a dad. Anyone can make a baby, but going through the day-to-day process of being a father is going to be a new experience. I’m very happy, very honored and very privileged and I want to make sure I do my absolute best for Pierre.”

Since the baby was born, Paul Staehle has yet to post on social media. On his Instagram stories, he left a text post that says, “I apologize. I apparently just violated our NDA and have been instructed to remove updates and no longer post. I truely apologize to leave everyone in the dark.” 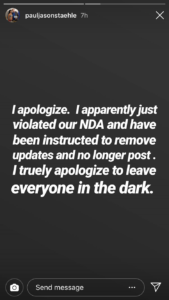 We aren’t sure exactly what he posted, but it is no longer on his account.

Why did 90 Day Fiancé star Paul Staehle ask for prayers?

On Saturday, Paul Staehle posted a photo of his wife. In the caption, he asked for prayers for his wife.

Photography by @otapacheco a true friend to us. Finest photographer and field producer we know. Also a good therapist in our darkest and craziest of times. He has always been there for us when things get bad. @staehlekarine ❤

Immediately, fans began offering support to the family. They were also wondering what could be going on. As mentioned, the couple has suffered two miscarriages. Fans thought that something was wrong with Karine Staehle or the baby during delivery.

Though the couple hasn’t explicitly stated what happened during the delivery, Karine Staehle did give TLC a little bit more information than we already knew. She said, “I am fine, and happy, even with the hard time I have had. And I am recovering well, but I am still very weak. It was super hard, but now everything is fine because the baby is calm and he is breastfeeding well.”

It’s unclear whether the couple will share more information about any possible complications that occurred. It’s worth noting that the post from Paul Staehle came after the baby was already born. From what it sounds like, there were complications following the birth.

What do you think of Karine and Paul Staehle’s new little one? Be sure to head over to Instagram to congratulate the 90 Day Fiancé stars!

Is Natasha Parker Open To Being ‘The Bachelorette’ After ‘BIP’ Drama?
‘MBFFL’: When Will Whitney Way Thore’s Mystery Man Reveal Himself?
‘Sister Wives’ Janelle Brown’s Outlook Is Why Her Following Is Growing
‘Love After Lockup’ Lizzie Kommes Shares HUGE Life-Changing Rebirth
‘Jealous’ Kendall Jenner Reveals Stormi Is Trying To Steal Her Man Devin