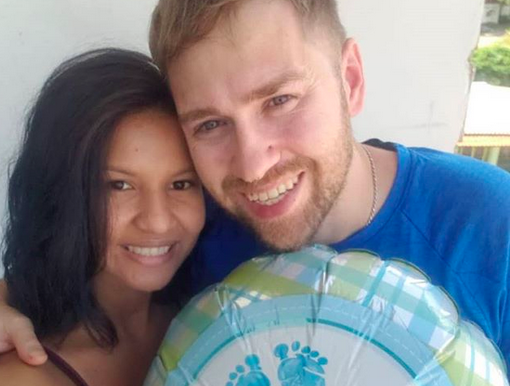 90 Day Fiancé stars Paul Staehle and Karine Staehle are currently expecting their first child together. The couple got married on November 3, 2017 after being on the show.

Since then, their relationship hasn’t been easy. They have experienced cheating scandals and a possible divorce was in question. Just two weeks after they tied the knot, Karine Staehle wanted to get a divorce. Plus, Karine Staehle suffered two miscarriages prior to getting pregnant with this baby.

Paul and Karine Staehle first announced the pregnancy in October 2018 They waited a little while to share this with their fans. This is probably because of the miscarriages. At the beginning of their pregnancy, they shared that they were worried about what could happen.

In October 2018, the expectant couple shared that they are expecting a baby boy. On a post on Paul Staehle’s Instagram, he said, “For those who did not read the articles. He is a boy.”

For those who did not read the articles. He is a boy.

In February 2019, Karine Staehle did share an update saying that her baby was measuring small. This was about five weeks ago and we did not hear another update. Since the baby had five weeks to go from that point, we think that he had a good amount of time to catch up.

On social media, Paul Staehle posted a picture of his pregnant wife. This picture was taken by a friend who is a photographer. Based on the caption, it seems like this photo doesn’t reflect the couple’s current situation.

Photography by @otapacheco a true friend to us. Finest photographer and field producer we know. Also a good therapist in our darkest and craziest of times. He has always been there for us when things get bad. @staehlekarine ❤

In the caption, Paul Staehle says, “Photography by @otapacheco a true friend to us. Finest photographer and field producer we know. Also a good therapist in our darkest and craziest of times. He has always been there for us when things get bad. @staehlekarine needs thoughts and prayers ❤🙏”

In this post, he doesn’t give any details about what exactly is going on. Since Karine Staehle has suffered two miscarriages, fans believe that she is having complications during delivery.

As mentioned, the baby was a little bit behind in size a month ago, but he still had time to grow. Maybe he isn’t big enough or he didn’t develop as expected.

Fans in the comments are sharing their thoughts and saying they will pray for the family. Here is what some of them are saying:

It sounds like the couple has a very supportive fan base. Their loving comments will hopefully be encouraging to the couple as they go through this tough time together.

What do you think is happening with Karine Staehle’s delivery? Hopefully, we will find out more news shortly. For other 90 Day Fiancé updates, check back on TV Shows Ace!