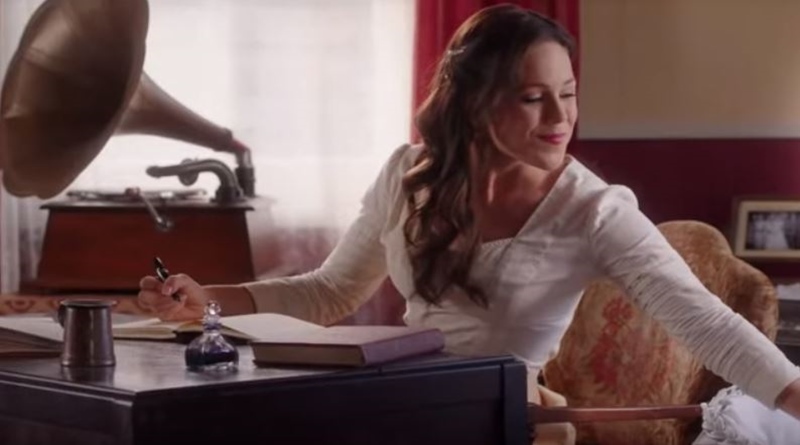 When Calls the Heart comes to Hallmark in just a few days. Ahead of the premiere on February 24, Erin Krakow talked to Hallmark and to Parade. Between Hallmark’s Facebook Watch interview and Parade, Hearties learned quite a lot more about Elizabeth Thatcher Thornton in the series and her real-life actor, Erin. In fact, we learn something about fruit salad, that is very typical of Erin both in and out of character.

Fans of Elizabeth hope that she finds love again. As Erin said in her Hallmark interview, “we can all agree we ended Season 5 on a sad note.” Of course, she referred to the death of her husband Jack Thornton (Daniel Lissing). In Season 6, raising her baby, Jack who was born during Hallmark’s Christmas Special, we will see at least two men interested in her. Erin told Parade that “Season 6 starts a little over a year after Jack’s passing and I think Elizabeth has found her way out of the fog of mourning.”

That’s great news because let’s face it, lots of Hearties were broken when Jack died. Hopefully, we can look forward to a few good times in When Calls the Heart‘s sixth season. That’s possible, as Erin also spoke about the new Mountie in Hope Valley. Kevin McGarry plays the role of Mountie Nathan Grant and Chris McNally acts as the new saloon owner, Lucas Bouchard. Lots of rumors and spoilers suggest they compete for her attention in a love triangle. But, will she find a new love in a hurry? It seems not, as Erin said to Parade, “although Elizabeth won’t be hurrying into any new romance, I can tell you that friendships between them will develop.”

On Facebook, Erin talked about returning to the set in Toronto to film When Calls the Heart Season 6. Actually, Erin loves Toronto and loves her job. On top of that, she mentioned how the cast and crew go beyond colleagues as they’re friends as well. “It’s really good to get back and feel all of that joy again,” she said. Erin added how “lovely it is to be acknowledged” for her “commitment to the show.” Additionally, speaking about the Hope Valley community, Erin adds that this season will see the “community really coming together to help with baby Jack.”

For Erin, exploring motherhood through her character Elizabeth has “been really wonderful.” Actually, the role of a pregnant Elizabeth was “huge fun,” though “very challenging.” Now, Erin feels the motherhood of Elizabeth presents a different side to the character, and “it’s been nice to explore” it. Over on Parade, Erin elaborated on adjusting to life on the set without Jack. It seems she’s able to move on as she has “some pretty cute babies on set to distract me! Also, some of my closest friends make up our cast and crew! Daniel may have left Hope Valley, but he’ll always be a part of my life. He’s a very dear friend.”

Remember when Elizabeth first arrived in Coal Valley? Actually, her appalling cooking skills made us all laugh. Later, Jack managed manfully to eat food prepared by his love interest but certainly, he never hankered for more. In fact, it seems Erin’s so into her role that this extends to her real life. Parade popped a few one-answer questions, and one of those involved her favorite meal to prepare. Erin answered, “fruit salad.” Oh, and if you ever get to eat with Erin, expect easy out the freezer ice-cream for dessert.

What do you think about Erin’s growth as a mother in the upcoming season of When Calls the Heart? Do you hope the season brings some joy after all the tears of Season 5? Also, did you get a giggle about Erin’s best-cooked meal – fruit salad? After all, messing up a fruit salad is probably something even Elizabeth might not manage to do.

Remember to check in with TV Shows Ace often for more news about When Calls the Heart Season 6.