Viewers knew Season 9 of Real Housewives of Beverly Hills would be wild. Now our suspicions have been confirmed. Beverly Hills as we know it may never be the same. Lisa Vanderpump, Kyle Richards and other co-stars reveal which friendships may be irreparable.

“There’s no quiet Housewife this season,” Kyle admits in a recent interview. She also notes that while some relationships “fell apart,” other friendships “connected” during this season. It will be interesting to see who is closer now because this season changes everything.

“Honestly everything was unexpected,” she continues. “There have been seasons where I would say, ‘Oh, this one is stirring the pot.’ I really don’t think that’s happening this season. It was just circumstances that happened that got everybody really upset and just started us on this crazy train of everybody getting upset and involved, but it wasn’t anyone purposely stirring things up at all. There was some stirring of the pot in the very beginning of the season, which led to a lot of it.”

The stirring of the pot did start in the first episode. These girls are already at each other’s throats. It is just going to get worse through the season. They are keeping a few details hidden for now. It wouldn’t be any fun if the entire season was spoiled. 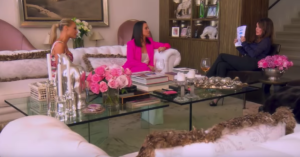 In the Season 9 premiere we saw the beginning of the fallout between Dorit Kemsley and Lisa Vanderpump after the dog Dorit adopted from Vanderpump Dogs ended up in a shelter.

“Lisa and I have been friends for a while and we go into the season that way,” Dorit says in a recent interview. “There’s a few things that I’m enlightened to and things have a way of twisting and turning.”

Kemsley said she “never” anticipated her friendship with Vanderpump to break down like that, and when asked if she feels betrayed by the Vanderpump, she responded, “Yes.” Because of this, it looks like their relationship won’t be fixed. Lisa and Dorit used to get along well.

Does Lisa Vanderpump Call It Quits?

While it’s not clear what the drama is after the dog drama, we do know that Lisa Vanderpump essentially stopped filming with her co-stars part way through the season. Her new tagline for the season, “You can stab me in the back, but whilst you are there, kiss my a**,” is said to address her drama with the rest of the cast. Rumors are that Lisa won’t be back next season because of everything that went down. With Vanderpump Rules and her restaurants, she doesn’t need the money.

The rest of this seasons tag lines are also telling of how the season will go. Will Dorit ever be forgiven? Will Kyle Richards and Lisa Vanderpump remain friends? Only time will tell. This season is obviously full of drama because it has already started one episode in.

Watch the women deliver their tag lines in full glam on Bravo every Tuesday 9/8c. Then head on over TV Shows Ace for a breakdown of all the drama on Real Housewives of Beverly Hills. You do not want to miss this season.