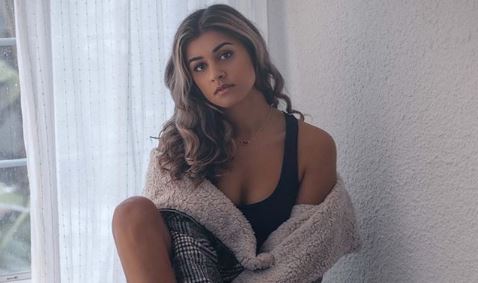 Last night on The Bachelor 2019, Kirpa Sudick was sporting a band-aid on her chin. It had everyone wondering what happened to her. She teased various things on Twitter but never admitted why she needed it. Now, ABC has shared a deleted scene from The Bachelor that reveals what went down.

Why Kirpa needed a band-aid

This video may only be 58 seconds long, but it does reveal what happened to her. Kirpa explains that when she first got to the area she thought it was gorgeous. She teased that Thailand “f**cked” her up and “not in a good way.”  The next thing you see is an ambulance.

She was simply trying to take a picture in front of the ocean, but things didn’t work out for her. Kirpa shared that the rocks and water were slippery. It sounds like she had a pretty hard fall, that caused the gash on her chin. After five stitches, she was able to go back to filming. They didn’t even have Colton Underwood go to the hospital with her, but hopefully, he knew about her fall. She seemed to handle it all pretty well and just laugh off her injury.

Kirpa held it all back

For some reason last night, Kirpa Sudick held back what happened to her. You can easily assume that it had to do with the fact that ABC let her know this scene was coming out. Now, the entire world knows the answer to the question about why Kirpa had a band-aid on her chin. No matter what happened last night, this was the big question everyone was asking on social networks. Now, it has finally been answered.

So far, you can’t tell if Kirpa will end up being the one that Colton Underwood picks in the end. It really does look like she could end up on Bachelor in Paradise if he doesn’t, though. This season is just getting started and there is so much more left to see.

Do you feel like The Bachelor should have aired this last night on the show? Share your thoughts in the comments section below. Also, make sure you catch Colton Underwood on Monday nights on ABC as The Bachelor.