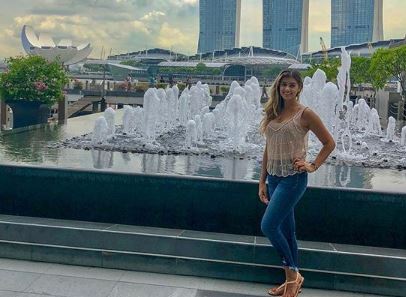 Tonight on The Bachelor 2019, Kirpa Sudick had a bandaid on her chin. The thing was everyone wanted to know why and nobody ever said. They didn’t even ask Kirpa about the bandaid, which was odd. So of course, Twitter went crazy trying to find the answers.

Kirpa Sudick talks about her bandaid

Kirpa actually did talk about her bandaid on Twitter. The crazy thing is she didn’t give any answers either. She just teased the fans about it in a few tweets. Here is what she had to say tonight during The Bachelor.

Everyone is creeping on Twitter trying to find out, but so far Kirpa Sudick isn’t saying a thing. Cassie Randolph did say that she still looks gorgeous, which was sweet of her.

I guarantee you that Kirpa is the coolest and most normal of the bunch. How do I know this?!BECAUSE NORMAL PEOPLE WITH NORMAL REACTIONS TO THINGS NEVER GET SHOWN #TheBachelor

More than likely, Kirpa Sudick did have some kind of accident or did have a pimple. Regardless, there was something on her chin she needed to cover up. You can assume that people asked about it, but they didn’t even air it on the show. It is hard to imagine that Colton Underwood would spend time with her and not wonder what that bandaid was there for.

The bandaid was gone by the end of the night. Kirpa did go on a date in the jungle so it would make sense that she might have hit herself on something. It looks like she is going to just leave us all guessing for now, though. Kirpa inquiring minds want to know! Don’t keep this in and share the truth. This could be the biggest mystery fo the season.

So what do you think happened to Kirpa Sudick’s chin? Do you think she will ever reveal the truth? Share your thoughts in the comments below. Don’t miss new episodes of The Bachelor with Colton Underwood on Monday nights on ABC.

Update: Finally a deleted scene from The Bachelor came out which revealed what happened.