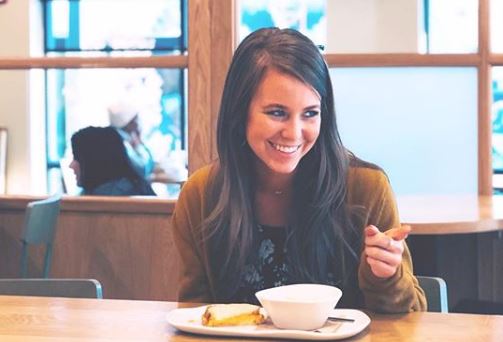 Jana Duggar is now the oldest Duggar that is still living at home. Because of this, she has decided to change rooms in the Duggar home.  She also had flowers in there that everyone wants to know who sent her. She shared this all on Instagram. Jana is one of the few Duggars to be on social networks before she is actually courting someone. Fans love that she is sharing information with them.

Jana has moved into a new room by herself. Now that some of the siblings have moved out, there are plenty of rooms free in the Duggar home. She shared an area in her room she calls a “quiet little nook.” It has to be nice to have some privacy in her own room as she does now.  She even showed a little painting that she did in her room for her nephew Marcus.

The reality star shared that she does still hang out with the younger girls. Here is what Jana had to say.

“I’ve had the choice to move to another room, but love being in the girls’ room with my sisters. The evenings are the best, we sit around talking and catching up on each other’s day.”

When checking out Jana Duggar’s room, you can’t miss that she has dried flowers hanging on her wall. This is not something that you would just keep for no reason. It has to be special to her. Of course, some of the fans hoped that they were from Lawson Bates.

Jana did already confirm that she isn’t courting Lawson Bates. Fans were hopeful, but that isn’t the case. If she is courting, it won’t come out until the new season of Counting On.

It turns out that her brother Jason Duggar is the one that gave her the flowers. That was really sweet of him, but fans are a bit disappointed that it wasn’t a new suitor.

Are you surprised to hear that Jana Duggar changed rooms? Do you feel like she will be courting soon? Share your thoughts in the comments below. Don’t miss Counting On when it comes back to TLC later this month.