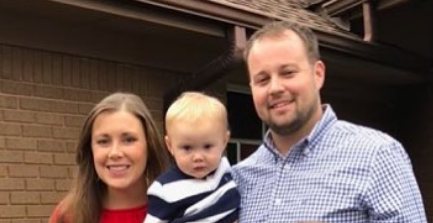 Anna Duggar shared a cute picture of her son, Mason Duggar, with the family’s dog. Fans are gushing over the sweet photo and saying how fast her youngest son is growing up. The little guy was born in September of 2017 so he is about 16 months old now.

The picture includes Mason Duggar sitting in the grass beside the dog. The post says that “these 2 are best friends!”

Another baby for Anna Duggar?

In one of the comments on Anna Duggar’s recent post, one of her fans asked if she would be having another baby anytime soon. This fan mentioned how she “would love to see another Duggar baby”.

Anna Duggar quickly responded and said that they aren’t having another child yet. She also shares that they would be thrilled with more kids. 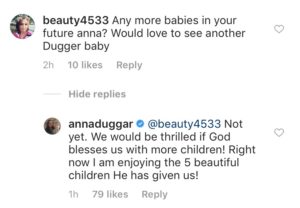 She has given birth to a child just about every two years since her first baby was born. Mackynzie was born in 2009. Her siblings followed in 2011, 2013, 2015, and 2017. Because of this pattern, it would make sense for another Duggar baby to be born in 2019. The age gaps may not have been intentional though!

In the comment, the mom explains that she is, “enjoying the 5 beautiful children He has given us!” It’s safe to say that she is probably busy with her five kids.

The Duggar family doesn’t believe in birth control so it’s not totally clear what Anna Duggar meant by “not yet”. Josh and Anna Duggar could have developed different views from what Josh’s parents believe, of course.

For a while now, fans have been wondering about another baby for Josh and Anna Duggar. At Christmastime, it almost looked as if Anna Duggar had another baby, but that wasn’t the case. She was just breastfeeding her youngest son at that point though.

Do you think that Josh and Anna Duggar will be expecting anytime soon? Leave your thoughts in the comments section! Even though these Duggars won’t be on Counting On, you can see the rest of the family when the show returns to TLC on February 11.