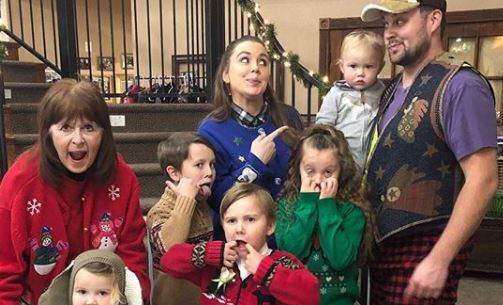 Anna Duggar has just confused her fans by making them think that she had another baby. The Duggar family of Counting On had their first ugly Christmas sweater party. It sounds like this is going to become a tradition for the family. Anna and Josh Duggar were there along with the rest of the family.

There is one picture from the Duggar Christmas party that has fans wondering what is going on. In this picture, Anna has on her sweater, but she is also breastfeeding a baby. Anna and Josh Duggar haven’t had a baby recently, so fans wondered what was going on. A few people commented thinking that maybe they had a baby and didn’t tell anyone about it.

More than likely, Anna Duggar was simply still breastfeeding their youngest son. It does look like she is breastfeeding and has a cover over her. Mason is just a little bit over a year old. It would make sense that she is still breastfeeding him. A lot of parents breastfeed past their child’s first birthday. It does even look like the child is wearing the same outfit that Mason can be seen in throughout the other pictures. He was missing his ugly sweater for the party.

The picture in question can be seen below. It is the second picture in this album that Jessa Duggar Seewald posted. Anna is in the background, but it is obvious that it looks like she is breastfeeding. They didn’t say anything about it, though, just simply shared the photo.

Part 2 of the ugly sweater party! . We ate way too much Italian dinner, then dove into desserts that were part of a baking competition. Next was a white elephant gift exchange, and then board games and a movie to bring the evening to an end.

Did Anna Duggar confuse you as well? Let us know in the comments section below. Make sure you don’t miss Counting On when it returns for a new season on TLC in 2019. Josh and Anna Duggar won’t be back, but everyone can’t wait to see how the Duggar family is doing.