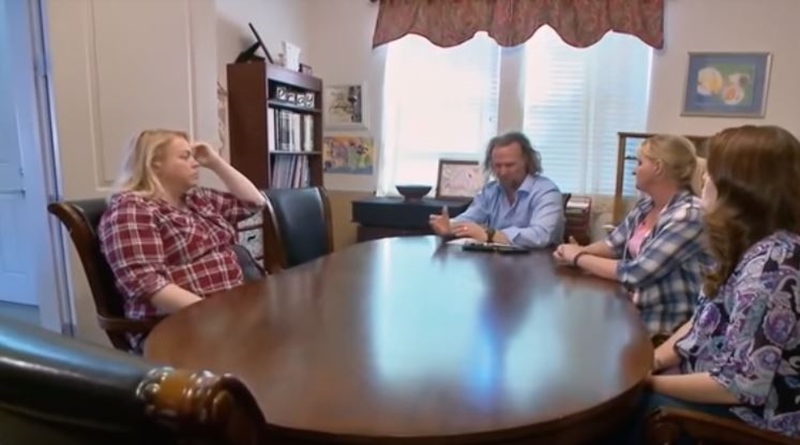 Sister Wives episodes about Meri Brown’s B&B loan were painful to watch. It seems that when Kody Brown called a meeting with Robyn, Janelle, and Christine last week that Meri got blindsided. Janelle, to give her some due, felt concern for Meri if she knew they had a meeting about her, without her. The meeting came about because Meri asked for a loan from the family to help her buy her old family home and turn it into a B&B.

The Sister Wives family always includes input from everyone when it comes to family decisions. As Kody said, the money and income need to reach all the kids and wives on an equal footing. In other words, their wealth or the lack of it is communal. He can’t send some kids to school with no nice shoes and others to school with “holes in them.” Working through issues as a unit works for plural families. As Meri was excluded from this meeting, that may explain why Janelle came over a bit uncomfortable.

Even Meri knew they had the meeting without her. They all tried to act casual as if it had not happened, but she picked up on that very fast. In fact, as they keep laboring the issue that she does not want them to be on the board of directors, it obviously annoyed Kody. When Kody and the other sister wives met without Meri, he turned the conversation that way. Robyn especially seemed upset about Meri asking for money but then going independent on them. All the wives, including Janelle, referred to how it’s always, since the beginning, been about all of the family benefits. Actually, all of the wives seemed to forget that Meri once had her very own beginning with Kody.

The meeting that Meri missed

The meeting that Meri missed makes her look further apart in this Brown family than at any other time in the Sister Wives show. While many fans feel she cries too much and feels sorry for herself, lots of them like that she just stood by her guns for once and really went for it. Viewers heard Meri say that she did it on her own. She got up and went off and made it happen. If the meeting that excluded Meri never happened, she may not have actually had the anger and the courage to go it alone.

While many Sister Wives fans grow angry about TLC revisiting the catfishing incident, at least the B&B is a newer storyline. Meri Brown still has many fans rooting for her. Here’s what some of them had to say about it:

This house has been a dream of mine for well over 20 years. Contrary to what may be believed, this is not a selfish act, it's about a legacy. #DreamComeTrue #LizziesHeritageInn #sisterwives

Robyn, the newest and now official wive of Kody seems to change sides and colors like a chameleon. In the show, she’s the first to complain about Meri. She comes over as the most judgmental on the wife she toppled off the Brown pedestal. Yet on her social media, she then tries to own the moment by writing, “It was seriously the most amazing experience helping @MeriBrown1 bring some of her family’s things back to the B&B. It felt like destiny and magic and I was happy to be apart of it [sic].” Really? Some Meri fans would question her real thoughts. Maybe it is just hard to tell what she means sometimes.

What do you think about the sister wives who had their secret meeting with Kody, which blindsided Meri for a while? She was quick to pick up on it though. Do you think that gave her the courage to go it alone?

Remember to check in with TV Shows Ace often to stay in touch with news about Sister Wives. Sister Wives airs Sunday nights on TLC.