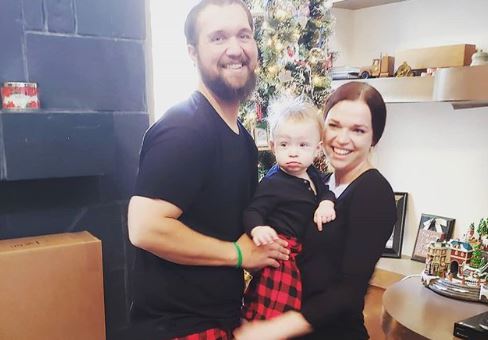 Sister Wives’ stars Caleb and Maddie Brush just revealed that they have a second child on the way. This will also be the second grandchild for the Brown family. People shared the details about this happy couple. They had their first child Axel James Brush in 2017.

Caleb and Maddie Brush are really excited to have a second child. The couple talked to People about the pregnancy and their thoughts.

Maddie said, “I am really excited. This pregnancy feels less real for some reason, but I am still over the moon! I have no idea what I think it is. I’ll just be happy with a healthy baby.” She did admit that she thinks Axel could be jealous at first. Caleb did say that he is excited, but thinks it is going to be a boy again. Everyone will have to wait and see when the couple announces the sex of the baby. It sounds like she doesn’t know yet.

Some Saturday Holiday fun at the DTS light parade. Fun time with family and Axel loved it… Almost as much as his light fan. 😂👌💚🎄😍

The family is living apart

Janelle Brown has made it very clear that she loves being a grandma. You can only imagine how excited she is to hear that she will be one again. Last season on Sister Wives the viewers saw Maddie and Caleb move back in with Janelle. Since then, the couple has moved out on their own. They stayed in Las Vegas when the family moved to Arizona. That is going to make it a bit harder on everyone when Maddie’s child is born and they don’t live close to each other.

Maddie Brush’s first delivery was done as a home birth. It was with her family there and was very difficult on her. Of course, some of the family may head back for her to have the baby.

Are you excited to hear that Caleb and Maddie Brush have another baby on the way? Share your thoughts in the comments section below. Also, don’t miss new episodes of Sister Wives on Sunday nights on TLC.