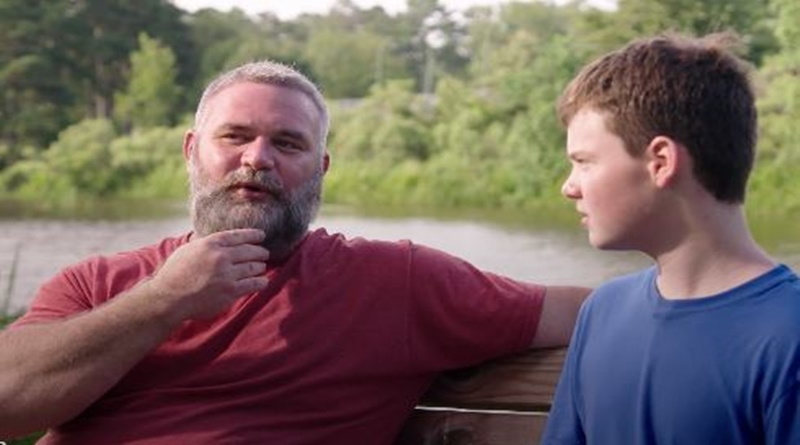 Seeking Sister Wife husband and father, Bernie McGee tries to talk to his son John (14) this Sunday about adding more wives to the family. Apparently, John’s not buying the idea of plural moms and the expression on his face could well end up as a meme on Twitter for years to come. We already know that Bernie’s wife, Paige, seems hesitant and cautious as well. Certainly, it looks like Bernie’s not getting all the cooperation he wants.

The Wrap revealed a sneak peek exclusive from TLC about Sunday’s episode of Seeking Sister Wife. In it, Bernie decides to have a one-on-one chat with his son John. It concerns the fact that men with multiple wives share different beds. John asks his dad how many wives he wants, to which Bernie says three would do him fine. Bear in mind, this multiple-marriage idea is not something the boys grew up with. Not members of the fundamentalist faith, it seems the idea came from reading the bible and seeing multiple wives went down well in ancient days.

From the look on John’s face, the idea simply sucks, but viewers see him trying to understand this new aspect of his father. Thinking of three wives and how his dad would balance that, he asks, “how would you do that though?”  Bernie immediately explains that he would rotate beds, which really seems more information than John wants to hear. Actually, what John wants to know, involves whether they would all live in one house.

Bernie McGee explains to the Seeking Sister Wife cameras that John’s of an age where he needs to understand. John naturally wants some clarity after Bernie tells him about sharing beds with his other wives and spending days and time with them. That concerns John, naturally worried about them not “mingling” and living together all the time. He straight up asks Bernie, “What are you talking about, spending different days...” Bernie then tries to tell John the reason he “wants to do this,” is because he “wants a big family, a strong family.” John’s expressions show he probably didn’t buy into the idea.

Bernie McGee said after the uncomfortable conversation that he never really engaged in a one-on-one conversation before. Now John’s a little older, it’s “kinda awkward.” He adds that he “hates to see him hurt or confused.” Funny that, as he said the same thing about his wife Paige when she looked a little cautious about the idea in a sneak peek at the Seeking Sister Wife couple.

Will John buy into the idea of plural moms?

To find out if John eventually buys into the idea of more moms and extra wives, fans of Seeking Sister Wife need to follow the show. It screens on Sunday nights on TLC at 10/9c. To recap, Paige and Bernie tried seeking a sister wife before, but Paige, overcome with jealousy, brought that to an end. In this season, they try again, but Paige seems a little uncertain, even though she tells Bernie “it’s time.”

What do you think of John trying to navigate through this conversation about new moms? Did he get more than he needed to know from Bernie McGee? Do you think he’s buying into it? Sound off in the comments below.