The Bold and the Beautiful spoilers for September 13-17, 2021, reveal Steffy and Finn once again trying to make a go of their marriage, but there’s more trouble brewing than just revenge from Sheila Carter.

The Bold and the Beautiful Spoilers: Is Paris in Too Deep?

Sheila (Kimberlin Brown) didn’t get exactly what she wanted out of Finn (Tanner Novlan) from her little week in the hospital and she is plotting more things to get her son to leave his wife for good and be at her beck and call. Steffy (Jacqueline MacInnes Wood) still fears Sheila, but she may not realize she also has to fear Paris (Diamond White).

Her seemingly innocent and perfect houseguest is once again there for Finn as he laments the fact that he wants to get to know his birth mother despite all the horrible things he’s heard about her. Paris is just happy he keeps coming to her for friendship. Things get dicey later in the week when Paris has quite the revealing fantasy about Finn. It’s obvious she wants to be more than just friends and she even catches her own self off guard. But will this turn into an obsession she just can’t help? That’s how it all started for Sheila all those many years ago in Genoa City. 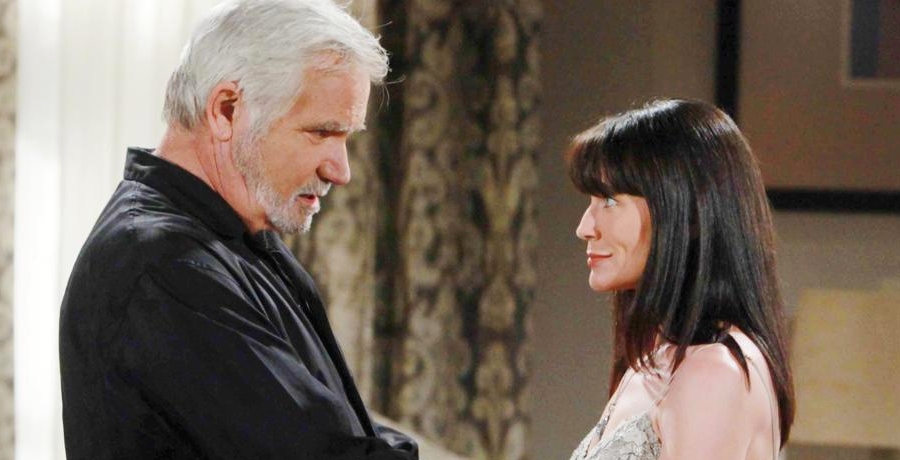 Eric Has A Big Decision To Make

Meanwhile, Eric’s (John McCook) life gets more and more complicated when all three Logan sisters show him a day of caring he never expected. Later in the week, Ridge (Thorsten Kaye) and Brooke (Katherine Kelly Lang) won’t stop badgering him to learn why he took Quinn (Rena Sofer) back into his life, while Quinn and Carter (Lawrence Saint-Victor) can’t seem to stay away from one another, although they do manage to control their feelings. Eric continues feeling bad for not being able to give his wife what she needs but he might find he has another problem as Donna gets closer to telling Eric that she’s still in love with him. What’s a man to do?

If Donna (Jennifer Gareis) confesses, will he have to tell her that he can’t perform, too? This is all getting to be too much for Eric. And it might become too much for Carter and Quinn as well. It looks like there is no solution to this very tricky situation.