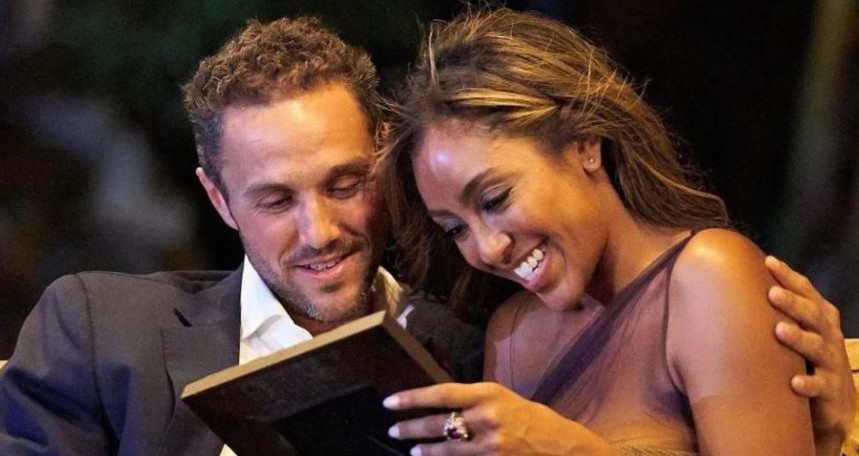 Two Bachelorette couples are celebrating anniversaries. Clare Crawley and Dale Moss just celebrated one year together. Now, Tayshia Adams and Zac Clark are also celebrating. The fan-favorite couple is celebrating a year since the time they met.

Zac Clark and Tayshia Adams both shared special messages to each other in honor of knowing each other 365 days. He went to Instagram to share thoughts about the 365 days he and Tayshia have known each other.

Zac said, “I hope your wish came true and I hope you take a minute to breathe and appreciate all YOU have done in the past 365 days since we met. You have done more in a year than most do in a lifetime.” He went on to list multiple things Tayshia has accomplished over the past year. Some of the things he listed were, hosting duties, winning an MTV award, hosting her podcast, multiple magazine covers, and a commercial.

Zac wrapped up his post saying, “And most importantly….tons of other sh*t the “public” does not get to see which includes showing up for the people you love, including me….thank you.” He added, “KEEEEEEEEP GOINGGGG 🚀❤️.”

Many fellow alums commented on the post including, Dale Moss and Katie Thurston.

Tayshia also went to Instagram to share her thoughts on knowing Zac for an entire year. She said, “At approximately this time 365 days ago, I met you! It’s been a wild ride so far with our lives going a million miles an hour but how lucky are we to have had an amazing week together at the place where it all started AND we were able to renew our wishes a year later?! WILD. Happy to have you by my side, Clarky. 143♥️ #happydaythatimetyou.”

Tayshia shared two videos. One of them talking for the first time during her season of The Bachelorette. The other video showed them making wishes at a wishing well fountain.

Their plans for the future

Right now, Tayshia and Zac are loving life together. They have noted they are doing well and enjoying exploring New York City together. Currently, they are not planning a wedding. Since COVID restrictions have lessoned they are just enjoying time together. Tayshia said they are happily engaged and dating each other.

As the year goes on perhaps they will decide on more solid wedding plans. In the meantime, they are happy and in love.

Stay tuned for more updates on Tayshia and Zac.