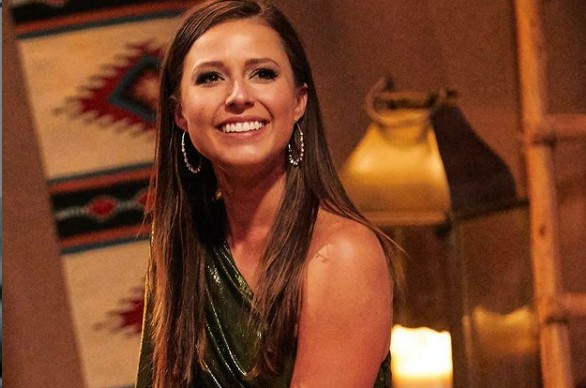 A lot of fans already know that Katie Thurston filmed The Bachelorette Men Tell All special over a week ago. At this special, Katie faces the men she sent home. The show tries hard to keep spoilers to a minimum. However, it looks like they may have slipped up with Katie’s season. What was revealed during a now-deleted clip of The Bachelorette?

Heavy shared all about this clip from Monday night’s The Bachelorette Men Tell All special. Now, those that follow spoiler guru Reality Steve may have already heard what’s coming. However, no doubt there are some who will be disappointed and upset by what’s about to go down.

Steve revealed earlier that fan favorite and Bachelor hopeful, Michael Allio self eliminates to be with his son James. According to Steve, fans will see Michael talk to Katie and take himself out of the running before she is able to meet his family. There are no exact details about how it all goes down.

Kaitlyn Bristowe and Tayshia Adams are set to host The Bachelorette Men Tell All Monday night. It makes sense since they were the two co-hosts for Katie’s season. It’s also rumored they will be returning to co-host Michelle Young’s season of the show. Her season is set to start filming in the next week or so.

There will be multiple men there to face Katie and each other. Previews indicate Karl will return to answer some tough questions for the guys. Thomas will no doubt make an appearance as well. Plus, Andrew Spencer appears to chat with the leading lady as well. Then, fans will see other favorites who Katie sent home with a broken heart.

It won’t be too much longer until fans will know for sure who Katie Thurston gives her final rose to. Spoilers indicate her ending is unusual. In fact, she even wrapped up filming an entire week early. Who will she pick?

Are you sad to know Michael leaves? Do you hope he’s the next Bachelor?

Casey Nezhoda Reveals Brandi Passante Isn’t The Only Sexy ‘Storage Wars’
Nanny Faye Has Chase Chrisley Blushing With The Junk In Her Trunk
Could There Be A Baby Number 4 For Jade Roper & Tanner Tolbert?
Jinger Vuolo’s New Post Has Fans Worried About Her Kids: ‘Are They Ok?’
Could Hallmark, Lifetime Christmas Movies Be Canceled Due To Hollywood Strike?