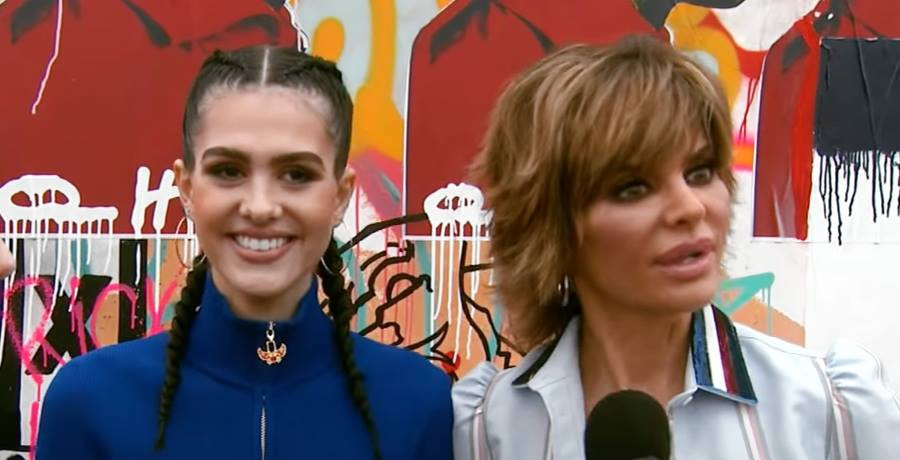 Lisa Rinna spoke out about Amelia Hamlin’s relationship with Scott Disick. As everyone knows, her daughter started dating Kourtney Kardashian’s ex-boyfriend in October 2020. On Wednesday’s episode of The Real Housewives of Beverly Hills, she went for a drive with co-star Erika Jayne. She admitted that she was as shocked as everyone else when she first heard the news.

The reality star didn’t hold back when she talked about her and Harry Hamlin’s youngest daughter. There is an 18-year age difference between Amelia and Scott. At first, Rinna felt “nervous” about her daughter dating the infamous man. But now, she sees it as a good thing.

On the Wednesday, June 30 episode of RHOBH, the reality star discussed her daughter’s new relationship. Lisa Rinna claimed that Amelia and Scott were “just friends” when they attended Kendall Jenner’s Halloween party last year. Her daughter assured her that nothing more was going on between them. “And then, I guess a couple of days ago, Amelia sends me a video of Amelia and Scott on the beach,” the actress explained.

Erika Jayne asked her, “So there’s something to it?” The Days of Our Lives star said, “Yes.” Rinna admitted that she asked herself, “WTF” because of the obvious age difference between them. “She’s 19. He’s 37 with three kids,” she said with a laugh. Rinna admitted that Harry was “calm about it,” but she was “a lot nervous about it.”

Regardless, the relationship has caught a lot of attention. RHOBH fans slammed the Bravo star for allowing her daughter to date a much older man. However, Rinna feels there is nothing she can do about it. Telling her daughter to not date Scott will only have the opposite effect.

Lisa Rinna has a change of heart

Throughout much of the episode, it seems like Lisa Rinna is going through the motions of her daughter’s blossoming romance. In her confessional, she admits that she “only knows Scott Disick” through the reality series, Keeping Up with the Kardashians. She’s also aware of his past relationship with Kourtney Kardashian and their three children. Now, she sees Amelia’s new relationship as a good thing.

In the past, her daughter struggled with an eating disorder. She even made headlines when she first came out about it in a previous episode of The Real Housewives of Beverly Hills. Rinna feels that Amelia’s relationship with Scott is a good thing now that no one is talking about her eating disorder. Rinna seems relieved about this pairing even if it’s unusual.

“Amelia has had her struggles in the press but now it’s a new headline,” she explained. “No one’s talking about the eating disorder anymore. And you know what, thank God. As a mother, I’m like, ‘Good, this gives her another label to deal with.'”

While Rinna claimed that Harry was fine with the relationship at first, she later revealed that he assumed Scott was 27 – not 37. Scott defended himself during the KUWTK reunion. He claimed that he doesn’t “go out looking for young girls,” rather they’re “attracted to me because I look young.” It’s a message that helps him sleep at night.