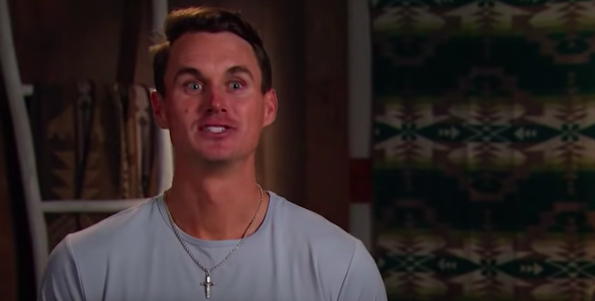 Bachelorette contestant, Mike Planeta, has made it clear he is a virgin. As it turns out, he plans on staying that way for a while.

Bachelor Nation loves to play up people’s virginity and their history with sexual encounters. This year it’s all about Mike Planeta. Mike has made it clear he is a virgin. During the Bachelor Happy Hour podcast, he elaborates on this Us Weekly says. He says that God made him like this because he gets “the most rotten ones first.”

“If you truly are convicted in something like this — and for me, I’m convicted, because I told Katie this and she started laughing, [but] I believe wholeheartedly God grabs the most rotten ones the earliest,” he reveals. “I was one of the most rotten ones when I was born. [God] was like, ‘You do not get to experience a lot of these things because you’re going to get in trouble.’”

This is certainly an interesting approach to the situation. It doesn’t end there though. He says now he uses this like protection, he knows he doesn’t get to do these things that everyone else does because he isn’t allowed.

A layer of protection for Mike

Mike seems convinced that he would be a huge player if it weren’t for this. In fact, he even told the network in his intro that people think he is a player when they first see him.

“Most people when they see me, they think I’m a huge player,” he says.

At the end of the day, Mike says he is waiting until marriage to have relations. Though a lot of people say that this action is needed to build a strong connection with someone, he doesn’t believe it. He is ready to take this journey with his future wife. Honestly, his strength to stick with this is pretty impressive. Hopefully, he continues along with his goal!

Do you agree with Mike Planeta? Let us know in the comments below. Come back to TV Shows Ace for more news on all of your favorite Bachelor Nation stars.