Danielle Busby took to her Instagram Stories to share how Riley was celebrating the end of her weekend with her little brother. As fans know, the OutDaughtered family recently went on a trip to see Adam’s parents. Currently, they are renovating their pool. And, the trip was the only way their children could enjoy some pool time without going somewhere public.

The quints and Blayke have been spending tons of time outside as they soak up the sun at their grandparents’ house. Adam and Danielle jested in one Instagram post they needed to work on the girls’ diving forms. Fans, however, corrected the couple noting the girls were as adorable as ever. They didn’t see anything wrong with the way they were playing.

In other posts, Adam reveals his parents have a bubble machine near the pool. So, the quints got to swim and enjoy bubbles at the same time! Overall, it seemed as though they had a lot of fun. 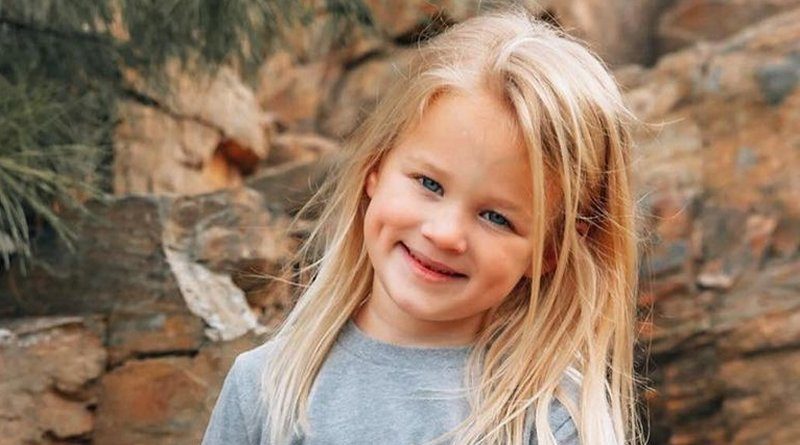 Danielle jested on her Instagram Stories that it definitely appeared as if Riley was having more fun than her little brother. Check out a photo of Riley dressing up her unamused little brother down below. The unamused pup was on the floor rocking an assortment of play jewelry. He was tolerating the game with Riley. But, he didn’t seem to be too amused.

Beaux is very much considered a member of the Busby family right down to having his own Instagram account. In fact, Danielle and Adam frequently refer to him as their little boy or their son. They often identify him as the little brother to Blayke and the quints. Some speculate Danielle and Adam partly call Beaux their son and baby boy so often just to confuse fans. Almost like a game, they enjoy playing on social media.

Do you think Riley Busby enjoyed playing dress-up a little more than her brother did? Share your thoughts with us in the comments.