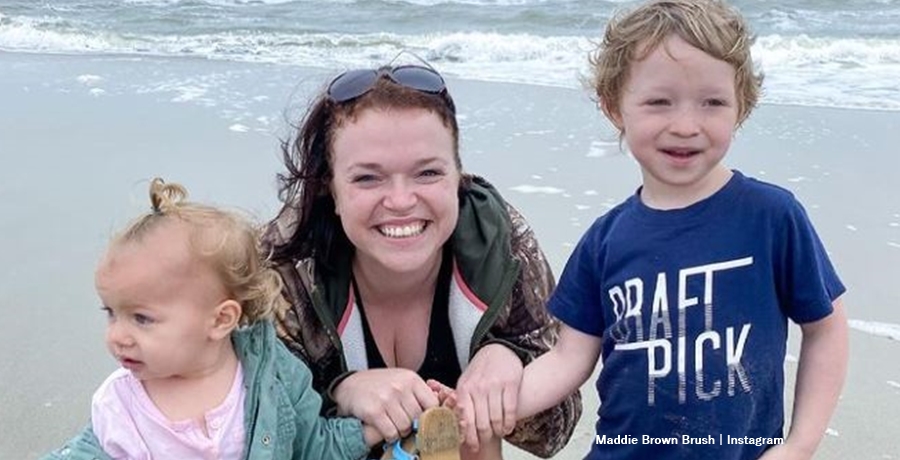 Maddie Brown and her daughter Evie twinned their outfits in the past, but this week she shared one that looked really good. Actually, with only a few seconds to get the snapshot, it worked out really well, Sister Wives fans agreed. Unfortunately, her son Axel didn’t want to be in the photo. Still, as she treasures her daughter so much, the photo will become a major memory in the future.

Janelle’s daughter sees Evie every single day. However that not enough for her adoring mom. So, she carries a photo of her little beam of sunshine on her phone. We reported that she posted up a picture of her sweet little girl this week. In her caption, she said, “This is my background photo, and every time I open my phone I smile because; look at her face! Just straight-up happiness! I love it. Thought I would share it again and bring some sunshine to your day! 💛🌼🍋”

Maddie Brown Brush Shares The Background Photo On Her Phone

Maddie Brown also previously shared a photo of her with Evie at the end of last year. They both wore light-colored tops and blue jeans. In that photo, where they twinned, her mom held her in her arms and kissed her little face. Fans loved the photo and the big smile on Kody’s grandchild’s face. This time, Maddie tried being a bit more adventurous and tried for a photo that showed her twinning with the kids while Evie stood next to her.

Planned photos are hard to capture

Axel, the first child of Maddie Brown is only four years old. He arrived on May 20, 2017, and he’s a bright little boy. Maddie said he wanted to take the photo of her twinning. It’s not clear if he did, but if that happened he’s clearly got a lot of talent. Perhaps, he might become a pro-photographer one day. Initially, his mom hoped for all of them to be in the picture. However, Axel opted out, even though she dressed them all in white tops and blue pants.

Fans of Maddie Brown heard that Axel wanted to “take the picture instead of [being] in it” Then Evie, at one-and-a-half years old, just couldn’t hold a pose for more than a few seconds. Well, that little bit of time to take the snap turned out alright. So Evie’s mom said, “Honestly, not at bad as I thought it would be.”

One fan said to the Sister Wives star, “It’s a beautiful picture!! Y’all both look beautiful!!” Then another TLC fan noted, “She is getting so big !! And cuter every time you post ❤️.”

What did you think of the snap that only had a tiny window of time to capture it? Do you agree that taking photos of toddlers often ends up a disaster? Sound off in the comments below.

Remember to check back with us often for more news and updates from Maddie Brown about Evie and Axel.