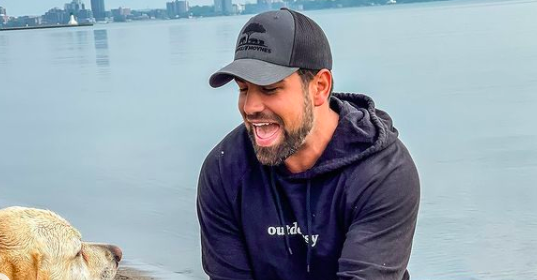 The Bachelorette has started and Kaitlyn Bristowe wants Katie Thurston to give Blake Moynes a shot. The star has already been on The Bachelorette, but Kaitlyn thinks they should still try. After all, Kaitlyn was in a situation just like this.

Katie Thurston is doing a great job so far being the first Chris Harrison-less Bachelorette. She has had the help of Kaitlyn Bristowe and Tayshia Adams to help guide her through her journey to love. One question on her mind though? What should she do about Blake Moynes.

Blake arrived on the new episode last night stunning everyone, especially his ex, Tayshia. Fans know him because of his time spent on The Bachelorette last season. He tried to get with both Clare Crawley and Tayshia Adams, however, neither worked out.

Of course, this is hard for Katie because he has already had his time and she already knows so much about him.

Kaitlyn Bristowe, who has been through a very similar situation before, is super supportive of Katie and Blake’s relationship Screen Rant reveals.

“It’s a really scary thing to bring someone new,” Kaitlyn reveals. “Like if you don’t have that connection, I would say, ‘Don’t do it.’ But if there’s any sort of spark there, this is your journey. This is your time to explore every relationship that you can.”

What does Tayshia think?

Of course, Tayshia agrees. The hosts agree that while it will make the men mad, you have to do what you think is best. Kaitlyn went down this same path with Nick Viall before so she has good insight.

“I would have really still thought about that person if I didn’t give it a chance,” she said. “And yeah, I made a lot of the guys mad.” Tayshia says: “But that’s how you navigate it, that’s how you figure it out.”

Katie still has a long road ahead of her when it comes to picking her future husband. She already shocked everyone with her first impression rose. It will be interesting to see how her season continues to change and develop. Maybe, Blake will make it all the way to the final two as Nick Viall did during Kaitlyn’s season.

Do you think Katie and Blake will make a good Bachelorette couple? Let us know in the comments below. Come back to TV Shows Ace for more news on all of your favorite Bachelor Nation couples.