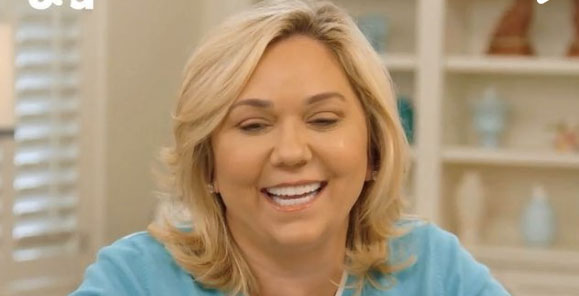 In response, Julie explains that she has “many, many things in the works right now.” So, Julie directs the fan to USA Network’s site for What’s Cooking with Julie Chrisley. Notably, the recent Instagram post likely comes from this segment. Additionally, for anyone looking to learn to cook like Julie, there are about 20 different recipes on the website. Consequently, that means there is some sort of demand for a cooking show and a cookbook.

Julie Chrisley shares who her favorite person to cook with

It should come as no surprise when Julie Chrisley shares that her favorite person to cook with is Chloe. Chrisley Knows Best fans know that little girl steals the show whenever she’s around. It is no doubt that Chloe is loved beyond measure. The latest post from the Chrisley Knows Best Instagram says it all.

In the post, Julie teams up with Chloe to bake Goochies. The adorable clip begins with Julie introducing Chloe. Then, they decide they’re going to bake Goochies. Next, Julie explains the Goochies are easy to make. She describes them as “similar to a praline brittle.” They’re probably so easy to make because there are only four ingredients. The ingredients are as follows.

Together, Julie and Chloe line a cookie sheet with graham cracker halves. After that, Julie chops a cup of pecans. Chloe takes on a variation of the recipe and adds sprinkles, chocolate, and white chocolate to her Goochies. While Chloe is creating her masterpieces, Julie makes the toffee topping. She uses two sticks of butter and a “heaping cup of brown sugar.” Then she explains that she’s going to stir it until the butter is melted and the brown sugar is fully dissolved. Next, it is key that this only boils for about two minutes. After that, all that’s left to do is pour the toffee topping over the graham crackers. All that’s left to do is put the Goochies in the oven at 300º for ten minutes.

Does it surprise you to know that Julie Chrisley says Chloe is her favorite person to cook with? Are you going to try and make Goochies for yourself? Let us know in the comment section below. Come back to TV Shows Ace for more Chrisley Knows Best news.