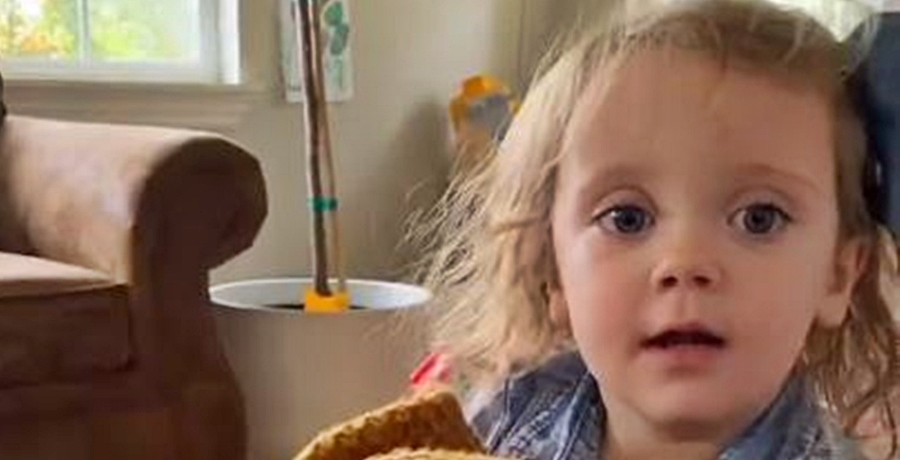 Ivy Seewald recently celebrated her second birthday and the two-year-old is full of mischief. However, some Counting On fans seemed concerned that she might have put herself in danger. Critics who watched the clip thought that potentially, she might have even died.

Fan of Counting On quickly grew to like Ivy, the sister of Henry and Spurgeon. She was blessed with beautiful eyes and an adorable nature. However, sometimes, she’s naughty and her mom talks to her about her behavior. Recently, she got herself into Jessa’s makeup bag and painted her face black. Funny, she told her mom that she looked “pretty.” Anyway, her mom reminded her sternly to ask before taking things. Plus, she noted her daughter should ask for help when it comes to applying makeup.

Actually, it seems that the little scamp Ivy Seewald often gets up to mischief. So, some fans of Counting On grew very concerned when a sad photo of the kid made them think she undergoes blanket training. It’s common in the Duggar clan and some people consider it very cruel. However, Jessa’s mom denied she does that. Hopefully, that’s true. After all, Jessa’s cousin Amy King thinks it’s a bad way to teach discipline.

Glugging Straight Out The Jug

When Jessa shared the clip of Ivy Seewald on Monday, June 14, she told fans, “Less than two weeks ago she had a birthday and if this doesn’t say “two years old” I don’t know what does. 😂” Well, it sounded like her brother Spurgeon ratted her out for drinking milk inside the refrigerator. At one stage, a child’s voice said, “I’ll show you where she is.”

Well, one thing that fans know, is that the milk definitely belongs to Ivy Seewald now. Probably a lot of slobber went back into the bottle as she chugged it down. Jessa’s sister Jill Dillard commented, “She’s such a hoot!!” Well, it looked like she felt quite comfortable inside the big refrigerator and Jessa said, “May be time for a refrigerator 🔒.” Actually, a lot of people agree that sounds like a good idea.

Concerned Counting On fans speak out

One concerned fan wrote, “climbing into a fridge is not something anyone should do. Ever. Lucky she didn’t die in there!”

Then another concerned person said about Ivy Seewald, “Oh my she needs to watch the #punkybrewster episode about not hiding in a [refrigerator] and the dangers of it!”

What are your thoughts about Ivy Seewald glugging down the milk in a space where she might have got locked in or stuck? Sound off your thoughts in the comments below.

Remember to check back with us often for more news about Counting On, Jessa, and her daughter Ivy Seewald.

‘When Calls The Heart’s’ Paul Greene To Become A Father Again
Scheana Shay Confirms Engagement, Feels At Peace With Life
‘The Wine Show’ Preview With Matthew Rhys, James Purefoy, And Dominic West On Sundance Now
Lifetime’s Thriller ‘Murder On Maple Drive’ Is About ‘Murder House’
Todd Chrisley Admits His Wife Julie Has Way More Class Than He Does