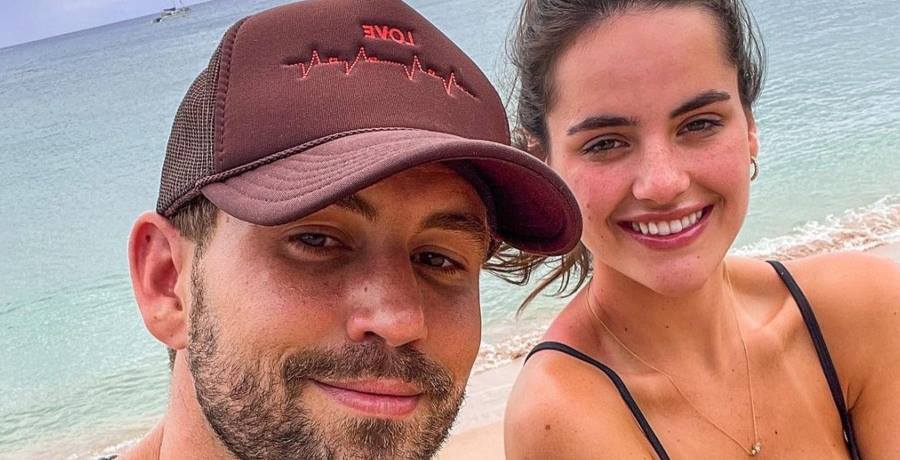 Nick Viall and Natalie Joy made their relationship official at the 2021 MTV Movie Awards. Now, they’re one of the cutest couples on Instagram, because of their cute photo ops. The most recent step in their relationship is a big one, and it comes with a lot of responsibility. They’ve adopted a puppy together.

Nick shared some adorable videos of the new puppy playing with stuffed animals. He also shared a picture that said, “Hello ladies, my name is Jeff.” The couple is smitten with the new addition and each other. Fans love that Nick is finally settling down with someone after a rocky romantic past being part of Bachelor Nation.

What Do People Think Of Nick Viall And His Furbaby?

Nick Viall shared a picture of himself with Natalie and Jeff. He captioned it, “family man,” which led Ashley Iaconetti to say, “without even seeing the caption, I said out loud what a nice little family!” Her husband Jared Haibon commented, “papa Nick.” Wells Adams commented that the two had the same hair since the pup has curly fur.

Ashley had revealed to her podcast listeners, she knew Nick was dating someone outside of Bachelor Nation but kept the name to herself. Fans had linked them together by snooping on their socials, but the two kept it private in the beginning.

On a separate post of him and Natalie at a wedding, Nick captioned it, “this relationship has escalated to weddings.” Jared Haibon commented, “you’re next.” It’s safe to say things are getting pretty serious for the couple. There have been some fans asking for Nick Viall to host BIP. With his relationship going so well, he might stay away from the beach this time around.

Timeline Of The Cute Couple’s Relationship

According to US Weekly, Nick Viall said Joy slid into his DMs and that was how they met. They hung out together and then she told him she wanted to date, and then went out to show “him what he was missing.”

They started dating at the beginning of the pandemic according to a source. In a cute photo of the two of them on Instagram, Nick said, “if you’re not willing to wear matching outfits you’re not really in love.” They were wearing matching plaid jackets and, because of the l word, fans knew it was getting serious.

Bachelor Nation has seen Nick be the villain, get his heart broken, and be the Bachelor. Now, they are getting to see him happy. What do you think about Nick and Natalie’s new puppy? Do you think getting a dog is a huge step in a relationship? Comment with your thoughts down below.