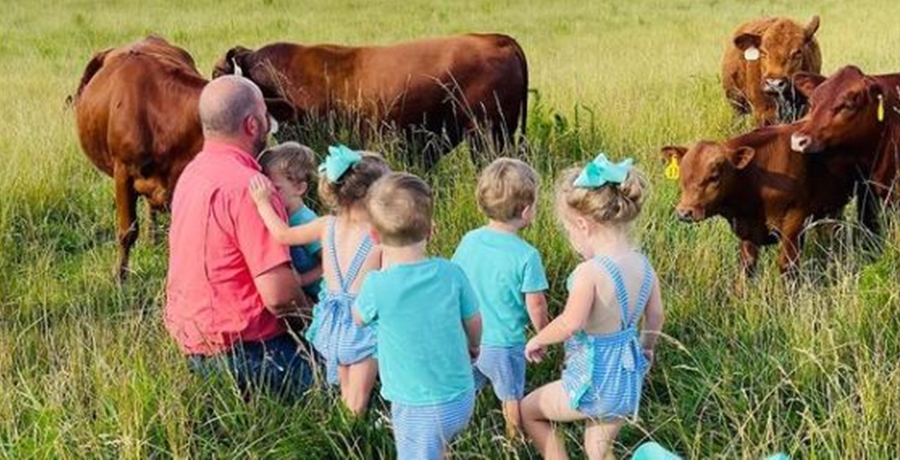 Courtney Waldrop and her husband,

Eric run some livestock on their property in Alabama. Eric works hard with the cattle and he also runs a landscaping and garden maintenance service. Of course, they also film for Sweet Home Sextuples and they raise nine children. Meanwhile, Eric also coaches the boys at baseball. That sounds like an exhausting lifestyle.

At the end of May this year, Eric’s wife showed a photo of her husband passed out on the small cribs that the girls sleep in. Clearly, he’s so tired after looking after the cows, running around supervising his job, coaching baseball, and helping out with kids. However, along came a photoshoot and yet he turned out looking so well dressed and clean that fans couldn’t believe he just miked the cows.

Courtney Waldrop wrote on Instagram, “Ok so Eric did not intend in getting in any of these pictures that we had made for Mother’s Day.😝 he was not dressed and pretty sure just come from working with the cows🤣 but I made him😜 glad I did!!” Well, this week, he took all the kids out and they visited the cows. Some of the bigger boys ran and walked, but the little kids traveled in the back seat of his truck.

As the photo that Courtney Waldrop shared revealed no car seats in the truck, she anticipated trolls. The TLC star’s caption read, “the sextuplets got to ride in the back seat of daddy’s truck!!” Then she explained, “Don’t panic I think the drive was 10sec and the big boys beat us … on foot we were going so slow.😝” Next, she pointed out that “to hear the babies you would have thought we were on a rollercoaster they loved it so much!!😉 They felt so big!!🤗”

Well, Courtney Waldrop made a decision that so many other people agreed they also did once in a while. Of course, car seats seem very important, but fans felt sad that she justified anything just for trolls.

One fan wrote, “How fun. I’m sorry you felt like you had to justify them riding in the back seat of the truck without car seats. You don’t owe anyone any explanations. Just keep on doing what you’re doing. You two are amazing.”

Another fan noted, “We have all done little things like that with our kids. Shame on some people.”

What your thoughts about the way Courtney Waldrop felt she needed to explain about the car seats? Perhaps sometimes trolls hit on her in her direct messages. Sound off in the comments below.

Remember to check back with us often for more news about Courtney Waldrop from TLC’s Sweet Home Sextuplets.