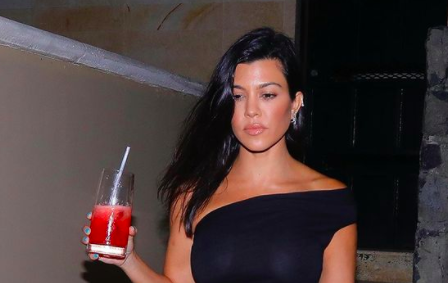 Kourtney Kardashian isn’t so sure about Scott Disick’s current girlfriend. A source reports that she isn’t getting too close in case they don’t last.

Most recently, Scott Disick has been dating Amelia Gray Hamlin. Amelia is only 19 years old. This may sound shocking, but Scott actually has a trend of dating younger women like this. This habit is actually contributing to Kourtney not getting close to Amelia.

According to ScreenRant a source says that the pair “say hello when they see each other and are polite, but Kourtney basically keeps her distance.”

“Kourtney isn’t intentionally trying to hurt or ice Amelia out, she just doesn’t want to get too invested in who Scott is dating,”

Most of this is because of the age range. Apparently, she thinks Scott is dating women that are too young.

“Unless it becomes really serious, like Scott gets engaged, she’s not really bothering with it.”

This is all a bit hypocritical though seeing as Kourtney Kardashian’s best friend is Addison Rae. Addison is a TikTok star and is 20 years old. Of course, they aren’t dating, but they do spend a lot of time together.

Of course, all of this is okay with Amelia though because she doesn’t want to make anyone upset. Especially the mom of Scott’s kids.

Amelia “is not looking to be this super stepmom to his kids” and “doesn’t want to ruffle any feathers over Scott’s relationship with the mother of his children.” ScreenRant reports.

While all of this is going on with Scott, Kourtney is in a pretty serious relationship herself. The Keeping up with the Kardashians star is dating Travis Barker. They have been public since Valentine’s Day and seem pretty happy together.

In fact, Travis has taken this relationship so seriously, he has gotten multiple tattoos of Kourtney’s name or Kourtney saying she loves Travis.

It seems like their relationship is pretty serious. It will be interesting to see if he ends up proposing to Kourtney. That will certainly change her relationship with Scott Disick.

Do you think Amelia and Scott will end up together? Should Kourtney Kardashian become friends with her? Let us know in the comments. Come back to TV Shows Ace for more news on all of your favorite Kardashian stars.