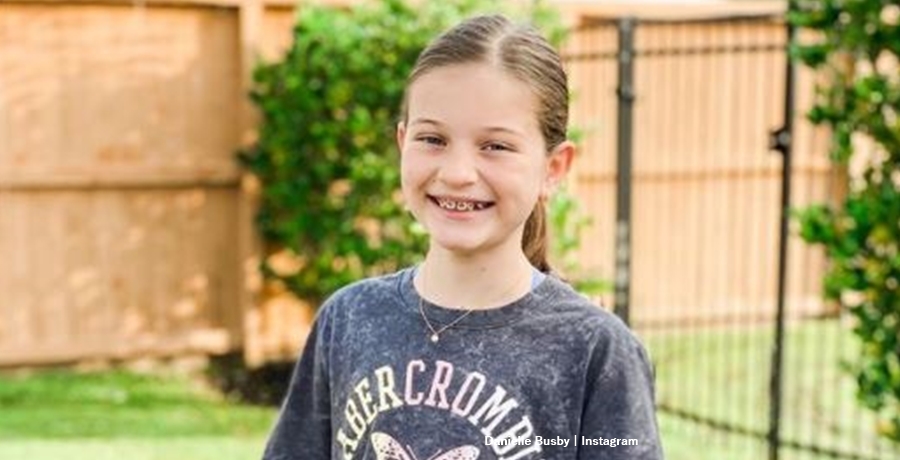 OutDaughtered mom Danielle went all the way for Blayke’s 10th birthday. The little girl is no longer a little baby anymore and she seemed overwhelmed by how time flew by. Later, she talked about how Blayke looks forward to a fun summer after she finished her last half-day of 4th grade. Now she talked about time moving on, once again. Certainly, it seems that she can’t get over how fast her oldest child grows up.

We reported in April, that a five-day celebration for Blayke ended with friends and family gathering at Easter for fun and games. After the long party, the family enjoyed a quiet time as she hit her double-digits and opened presents. Prior to that, Danielle made no apologies for going all out as her daughter turned 10 years old. In fact, we noted that if Blayke ever felt left out with all the TV focus on her sisters, that probably just evaporated. Danielle told fans that time just seemed to fly by and her baby suddenly grew up.

On Friday last week, the OutDaughtered mom Danielle again seemed a bit taken aback by her child growing up. She shared a photo of Blayke on her Instagram and spoke about how she really looks forward to summer. In addition, she told fans that it was her last day of Grade 4. Taking to the comments, TLC fans talked about how fast she grows up and what a pretty young lady she is. In fact, a lot of them think she twins with her mom. Tall, and slim like Danielle, she really looks attractive and confident.

Can’t get over her daughter soon entering middle school

On Sunday this week, OutDaughtered mom Danielle posted up another photo of Blayke. In the caption, she talked about how she soon enters her last year of elementary school. In another year, she’ll start middle school. Before we go into the details, the TLC show has viewers from many countries. These include the UK, Australia, some other European countries, Asia, and even Africa. In the USA, their grades might differ from other places. While most people know about Pre-K (playschool in Africa), in other countries, they also understand kindergarten.

However, not everyone knows that primary school (elementary) comes before middle school. Next, in many places across the world, the kids go on straight to high school after primary (elementary) school. They remain there until they graduate with their final school leaver’s certificates. But in the USA, they finish up middle school and then attend high school. So, just to explain, Blayke soon starts 5th grade. It’s her last year before she goes on to middle school’s grade 6, sometimes known as Junior High. After that, she goes to high school.

In her post, OutDaughtered mom Danielle noted, “Still can’t believe my Blaykers is gonna be in 5th grade, Last year in elementary school 😢.”

In the comments, fans talked about how time literally flies by. One of them commented, “she’s growing up so fast🥺.” Then another fan wrote, “They grow up way too fast. Savor every minute!”

What do you think about the fact that Blayke now enters her last year before she completes elementary school? Are you glad that at least she spends a year in the same school as her little sisters who soon start in Grade 1? Sound off in the comments below.

Remember to check back with us often for more news and spoilers about OutDaughtered Mom Danielle Busby and the kids on TLC.