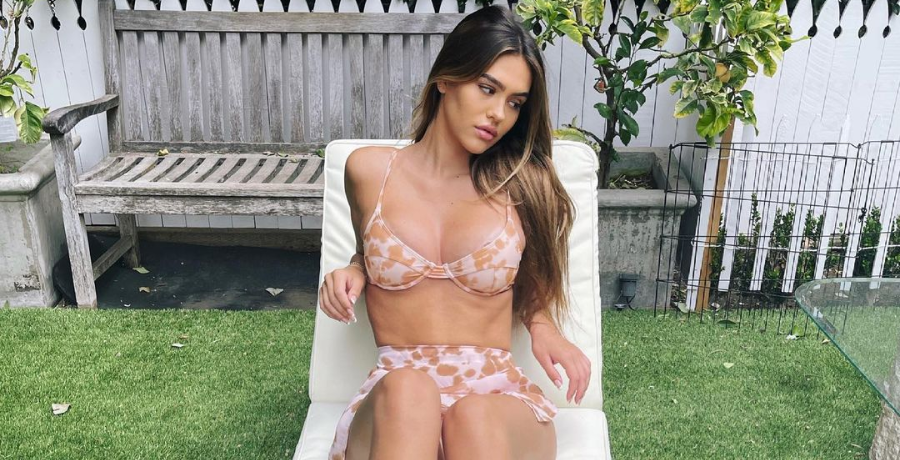 Amelia Hamlin wanted to show off her new lavender lace lingerie. But she didn’t want to show it off in a traditional mirror selfie. Instead, The Real Housewives of Beverly Hills star found “uncomfortable ways to sit in a chair” while showing it off. The 19-year-old continues to make headlines for her relationship with 37-year-old Scott Disick.

Their relationship will be one of the storylines on Season 11 of RHOBH. Lisa Rinna admits that he’s too old. However, she doesn’t reveal yet whether she supports this unexpected pairing. The model shared three new sexy photos of herself in nothing but a lacy bra and a matching thong.

On Sunday, May 23, Amelia Hamlin shared a carousel of photos on Instagram. The photos show her wearing a lavender lace bra with a matching high-waisted thong. In the caption, she wrote, “searching for new and uncomfortable ways to sit in a chair.” The reality star showed little to the imagination.

Earlier this month, Amelia made headlines for wearing next to nothing while on a date with her boyfriend. The young star posted a photo of her sheer top, which revealed that she was braless. She couldn’t keep her hands off the father of three. Amelia is clearly smitten with Kourtney Kardashian’s ex-boyfriend, who she calls her “dream guy.”

In her latest photo, Amelia lounged around at home in nothing but her underwear. She wore a balconette bra and matching high-cut bottoms from the lingerie brand Boux Avenue. She tagged the designer in her Instagram post. On their Instagram account, their bio states: “Empowering Lingerie💗Loungewear, Nightwear, Swimwear & Activewear
Designed in London for your Shape, your Style #myboux 👙.”

Amelia’s steamy post amassed over 30,000 likes. Her friends and followers don’t think she looks uncomfortable at all, but they can relate. RHOBH star Dorit Kemsley wrote, “😂😂😂 I feel you! ❤️💋. David Einhorn, the owner of Papi Steak Restaurant, commented, “Damn girl you breaking the internet.” Even Amelia’s mom, Lisa Rinna, shared her support when she wrote: “Caption Queen 🤍.”

Scott Disick’s model girlfriend should “put some clothes on”

However, Amelia Hamlin didn’t receive a lot of support for her sexy photos. One troll wrote that she should “put some clothes on.” They added, “Who sits around their house like looking so uncomfortable 🙄.” However, some Instagram users argued that if they looked like that they would be “naked” around their house.

“omg i so would she looks amazing, sit any [damn] way she wants with a bod like that..” one added.

Then some brought up Amelia’s relationship with Scott. Another troll suggested that Harry Hamlin and Lisa Rinna’s daughter should “Go to college and get an education instead of running around with a man old enough to be your father.” Some of Amelia’s fans argued that people shouldn’t care if they’re both happy. Regardless, most people loved her sultry photos.

What are your thoughts on Amelia’s lingerie photos? Sound off below in the comments.