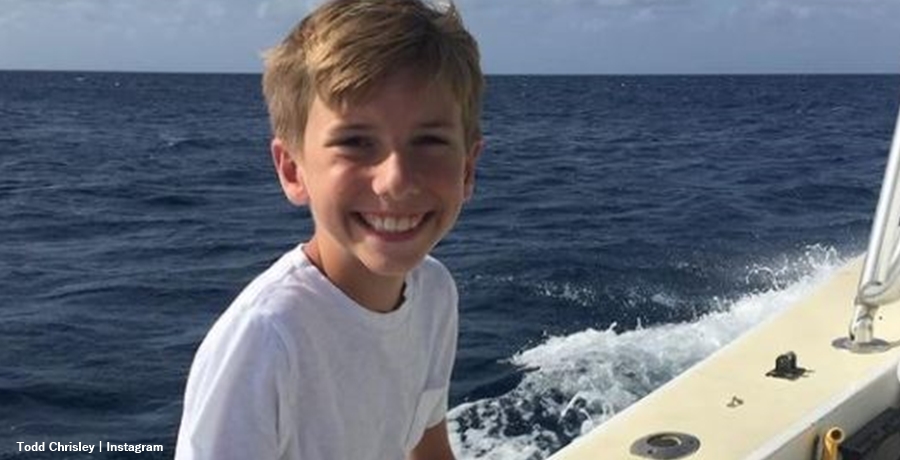 Todd Chrisley’s son Grayson celebrated his 15th birthday on May 16, 2021. Chrisley Knows Best fans can’t help but notice how he seems so grown up these days. Bear in mind, they followed his story on the USA Network since he was just a little kid. On his birthday, his dad took to Instagram and revealed how he nearly “scared ” them “to death.” He also talked about how much he loves his son.

In their podcast, Julie and her husband often talk about their family. Sometimes, Savannah joins her mom or dad if they’re tied up with other things. In April, Julie pointed out that he soon starts driving and in just a few weeks’ time. His dad mentioned that he actually stands 6ft tall now. Fans already noticed his height as he plays baseball and obviously looks taller than his dad. Sometimes, his dad posts photos of him enjoying his tournaments.

Todd & Julie Chrisley Talk About An Upcoming Milestone For Grayson

Todd Chrisley’s son Grayson also featured in the Chrisley Confessions in early May. Fans asked if they plan on changing the rules when it comes to Grayson dating. Well, it seems strange for fans that he even thinks about it. After all, in their minds, he’s still a little boy despite his height. However, Julie explained that Grayson is already mature for his age. Nevertheless, they probably won’t give him too much leeway on dating just yet. Actually, Todd knows his son grows up fast, but still thinks of him as their “baby.”

The 15-year-old son gave his parents a big scare

On Instagram on his birthday, Todd Chrisley’s son Grayson received a lovely message from his dad. The young man changed so much that fans seem a bit amazed when they see him on Chrisley Knows Best. However, for his dad, he’s still so very precious. He explained that Grayson grew into “a wonderful, kind, caring,” and “compassionate young man.” He also noted, “I love you with all my heart and soul son and there just aren’t words to explain how much you mean to me.”

However, Todd Chrisley’s son Grayson also “scared us to death,” he added. The USA Network star explained how his son arrived prematurely. After literally “10 hours” of cuddling and caring for their baby, he finally started feeding. His dad said, “I cried so hard from exhaustion and sheer joy that our baby was gonna be fine.”

Naturally, many fans wished him a wonderful birthday. One of them noted, “Omg he is all grown up😢.” Then another one commented, “We really watched Grayson grow up🥺.”

Remember to check back with us often for more news and updates about Todd Chrisley’s son Grayson.