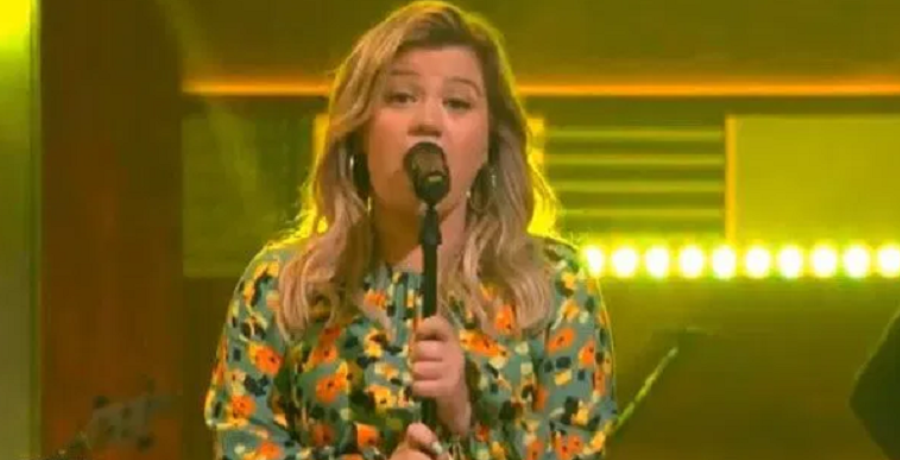 Kelly Clarkson performed her rendition of “Lost In Your Eyes” by Debbie Gibson. In her latest “Kellyoke” segment, she sang a dreamy cover that had fans swooning. Gibson wrote the song in late 1987 for her second album, Electric Youth. However, it didn’t drop until January 6, 1989. “Lost In Your Eyes” debuted at No. 42 on the U.S. Billboard Hot 100 chart during the week of January 21.

It didn’t go No. 1 until March 4, where it climbed to No. 1 and stayed there for three weeks. “Lost In Your Eyes” became her most successful single. It also hit No. 1 in Canada for three weeks, and outside of North America.

On the Friday, May 14, Kelly Clarkson and her band Y’all performed this cover. This time, the singer wore a gray denim dress with black boots and a matching belt. Clarkson paired her look with silver dangling earrings. She sang the beautiful ballad as the blue and red lights flashed behind her.

Once again, fans shared their praises for the song. As of Friday afternoon, the video posted on The Kelly Clarkson Show YouTube page amassed over 5,000 views. Fans could hear the pain in her voice. They wonder how hard it must be for her to sing emotional songs amid her divorce.

Fans don’t have anything bad to say about Clarkson’s “Kellyoke” covers. They feel that each one is effortless and just as good as the last one. One fan said that the “worst part” of “Kellyoke” is when she stops singing. Fans agree that Clarkson keeps slaying her performances.

Will she ever release a country album?

In a previous report on Country Music Alley, Clarkson gave a country rendition of the hit song “Home” by Edward Sharpe & The Magnetic Zeros. The indie song ended up as a smash hit in 2010. This version had fans stomping their feet along to the music. At the time, they also asked for a country album.

What are your thoughts on this latest “Kellyoke” segment? Sound off below.

WOW! Jackson Roloff Shows Off His Amazing Talent
Netflix Reveals If It Will Save ‘Manifest’ From Cancelation
‘LPBW’ Tori Roloff Melts As Jackson Takes Lilah On Four Wheeling Mission
Is Erika Jayne Calling One Of Her Co-Stars A ‘Snake’ For Leaking Info?
RHOC’s Kelly Dodd Tells RHOBH’s Erika Jayne: ‘Act In Good Faith’