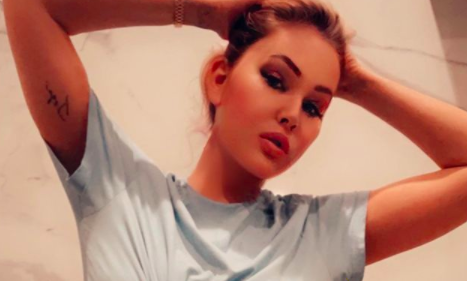 Travis Barker and Kourtney Kardashian have been very publicly dating for a few months now. Travis Barker’s ex-wife is no longer staying quiet on what she thinks. Turns out, she finds the relationship weird.

More specifically, she has an issue with the PDA between the couple and his re-used moves. By the looks of photos taken, they do seem to always be touching each other.

More than that, the movie the couple (Kourtney and Travis) bonds over was actually her (Shanna) and Travis’s movie first, which makes things even weirder. In fact, their daughter is named after a character in that movie. It even sounds like he is using some of the same moves to make Kourtney swoon that he used on his ex-wife. Talk about awkward.

“I’m very much over my ex. It’s been a long time. However, do I think some of the PDA that he’s doing with her is weird? [Yes],” she says. “The movie, True Romance, that I feel like they’ve been bonding over was the theme of our wedding. Our daughter’s named after the character in the movie. Flying banners overhead like we did on Meet the Barkers. Stuff like that … I just think it’s weird,” she continues.

Her feelings are totally valid. Honestly, Kourtney should be questioning some of these things. It seems the two couples have a little too much in common at this point.

Despite only having been dating for a few months, the couple has made a major commitment to each other in the form of ink. Not only did Travis already get a tattoo of Kourtney’s name. But, he actually let Kourtney tattoo him. Yep, the Keeping up with the Kardashians star took a tattoo gun to someone’s arm.

Kourtney tattooed her boyfriend with “I love you.”

Certainly a sweet sentiment. One thing is for sure though, he is lucky she has great handwriting. It by no means looks like a professional did it, but she also didn’t do half bad. It could’ve gone much, much worse.

Do you like Kourtney Kardashian and Travis Barker together? Or, do you agree with his ex-wife and think their relationship is a bit over the top? Let us know in the comments below. Come back to TV Shows Ace for more news on all of your favorite Keeping up with the Kardashians stars.

Jill Dillard Shares Cryptic Message Following Brother Josh Duggar’s Arrest
Which Duggar Courtships Seem To Be In The Works?
‘The Young And The Restless’ Spoilers, June 11-14: Summer Needs To Watch Her Back
Kody Brown & Wives DRAGGED For Recent Treatment Of Meri
‘KUWTK’: Wait, Does Kanye West Have A Girlfriend?!