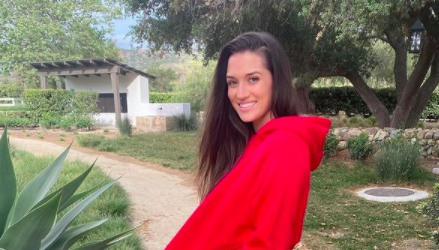 There has been a lot of drama going on in Bachelor Nation. A lot of this has to do with the departure of Chris Harrison. Now, Bachelor Nation stars are talking about what they think will happen to the show without him. Jade Roper and Tanner Tolbert aren’t confident in the show this season or Chris Harrison’s return.

‘The Bachelorette’ returns without Chris Harrison

The Bachelorette is returning this summer and will feature Bachelor alum, Katie Thurston. Of course, this is the first Bachelorette without Chris Harrison as the host and fans are freaking out. After all, he has been a staple in the show the entire time it’s been around. What do former Bachelor stars think will come from this? They are guessing lower ratings US Weekly reveals.

“It’s going to be interesting. I think they’ll do a good job. I mean, they’re both very well-spoken and bring a lot to the table,” Tanner Tolbert says, referring to co-hosts Tayshia Adams and Kaitlyn Bristowe.

Of course, while the girls are sure to do a great job, they just don’t carry the same fan base that Chris Harrison does.

Tanner continues to make a good point saying Chris really is the face of the show. Because of this, lower ratings will not be a surprise.

“I think they’ll do a good job, although I’m a CH fan. I still hope there’s some sort of resolution there just because, I mean, he is the face of the show,” he says. “So it’ll be interesting to see how it goes. I’m sure ratings will be down a little bit this year. … If I had to guess, I think ratings will be down because I think there will be a certain section of people that say, like, ‘I’m not watching without Chris Harrison.’ Even though that’s kind of a silly take because the show is still the show, but it’ll be interesting to see what happens moving forward.”

The couple is scared

Turns out, Tanner is scared that a Chris Harrison return will never happen. He says he keeps waiting to hear rumors but nothing has come up yet. The longer it takes, the more worried she gets that this is a permanent change.

“I thought Chris would be back when this all happened initially, like, I was like, ‘Oh, he’ll be back for sure. … he’ll just take off one season or whatever the case may be.’ But I haven’t heard any rumors,” he said. “[But] the longer it is in between, like, the more doubtful I become.”

It’s a scary thing to think that Chris could never come back. However, it hasn’t actually been that long so there’s a good chance the host will be back soon enough.

Will you still be watching without Chris Harrison? Let us know in the comments below. Come back to TV Shows Ace for more news on Chris Harrison and all of Bachelor Nation.