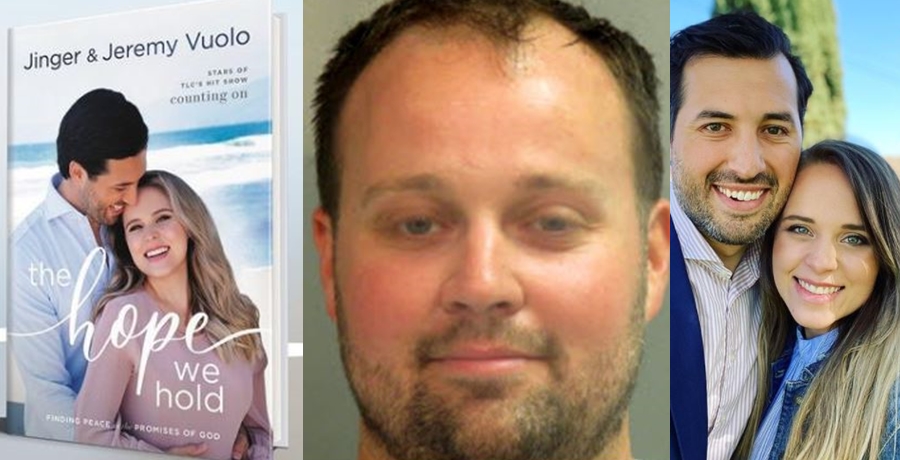 Josh Duggar previously caused a scandal with the molestation of his sisters. Recently, he ended up arrested on charges of possessing child abuse material. It seems that the Counting On family just can’t escape humiliation and embarrassment. However, it seems that Jinger and Jeremy Vuolo couldn’t have picked a better time to launch their book, The Hope We Hold. With her brother trending across social media, fans wondered if she wrote about the original molestation scandal. Well, she delivered on that.

TLC fans heard back in March this year that Jinger and Jeremy wrote a book. At the time, they didn’t announce it, but it was spotted listed on Amazon. The book, The Hope We Hold, shares how the Duggars lived and how Jeremy met his wife, and their love story. Additionally, it promises content about living their life with faith in God. Since then, then the official launch took place and most reviews seem very positive. Some people say it’s the sort of book fans might read from cover to cover in a night.

After the latest Josh Duggar scandal, some Counting On fans wondered if Jinger and Jeremy Vuolo might hold back on releasing their book. Despite the family drama, the couple decided to proceed with sending their book out into the world. Well, it actually makes sound economic sense to go ahead with the book. Distasteful as her brother’s arrest for possession of child abuse materials is,  the Duggar name trends. Probably, they didn’t plan for the two events to coincide, but it won’t hurt their bank balance.

Jinger opens up, recalls when the original molestation broke in the news

Today reported that Jinger wrote about Josh Duggar in her new book. The Counting On star recalled when the news about his molestation broke. The family knew about it before the scandal rocked the TLC world. Jinger, still a teenager at the time, said that they already dealt with it as a family. Healing takes years, and just as the family started moving on, it hit the headlines. So, she relieved the “nightmare.” She penned, ” I felt shell-shocked as if a bomb…exploded.”

The Josh Duggar scandal drew reporters like vultures to a carcass. So soon, they camped outside the Duggar home where Jinger lived back then. Next, Jim Bob and Michelle decided the family should flee in the dead of night. Jinger recalled how the kids couldn’t even play outside, so they took everyone away for a bit. Her dad parked the bus so it shielded the door from reporters and everyone packed a bag. Then, after the paparazzi fell asleep. they snuck out and drove away.

It sounds like a deeply disturbing time for Jinger Vuolo. So, it probably feels even worse now that Josh Duggar hit the headlines with some very serious allegations against him. Will Jinger ever escape from the fallout of her brother’s scandals? Sound off in the comments below.