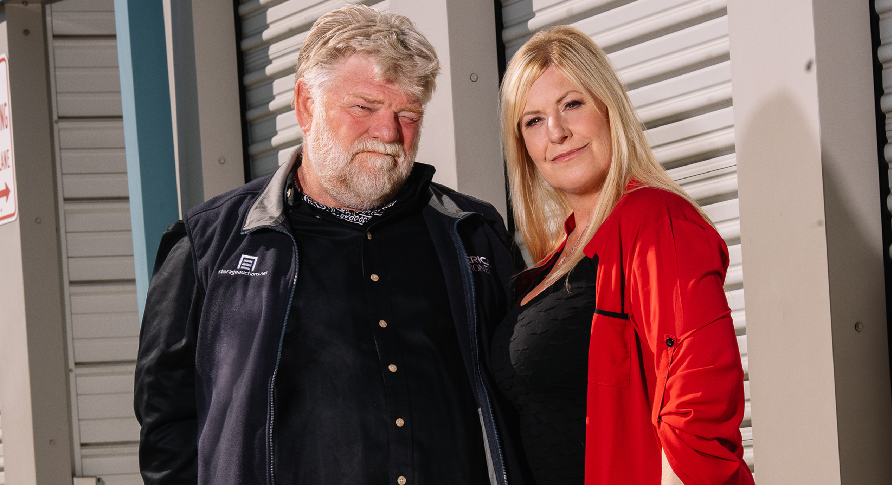 Storage Wars Dan Dotson had some explaining to do after his hand was all bandaged up during this week’s new episode of the A&E series. Turns out, the auctioneer was recovering from a pretty severe injury at the time the episode was filmed.

Turns out, Dan Dotson did explain what happened and how he nearly lost one of his fingers back in December of last year. The Storage Wars star shared a very graphic video on YouTube that details what happened and shows several photos and video clips of the injury.

According to Dan, he suffered the horrible injury after trying to break up a brawl between his two French Bulldogs named Jax and Louis. One of the dogs bit him on the hand while he was trying to put an end to their fight. And, the dog nearly tore his finger completely off. According to his video, the dog nearly severed his ring finger on his left han completely. Fortunately, the doctors at Redlands Hospital in California were able to save his finger.

At the beginning of the video, Dan Dotson did defend both of his dogs. He noted: “Louis and Jax are best of friends but when the bullies get in a fight, you have to be careful where you place your fingers. Louis accidentally bit my finger off. Thank you Dr. Grigoryan for saving my finger.”

The Storage Wars auctioneer jested he would leave breaking up any future fights to his Mastiff named Rambo. He noted Rambo did an incredible job ending the fight by clamping and pinning the more aggressive French Bulldog.

Most Storage Wars fans admit they were glad Dan Dotson was alright. But, they did not believe there should be any ill-will toward the two French Bulldogs. In fact, most agree it is best to leave Bulldogs alone when they are fighting as opposed to trying to break it up. Furthermore, most agree the dogs likely love Dan and his wife and never had the intention of hurting him.

Did you know Dan Dotson nearly lost his left ring finger before watching this week’s episode of Storage Wars? Fortunately, it doesn’t sound like Dan has any hard feelings toward his pups. Likewise, it also sounds like he plans on keeping his hands and fingers out of it if the dogs get into a fight again!

You can check out new episodes of Storage Wars on Tuesdays at 9 p.m. ET on A&E.