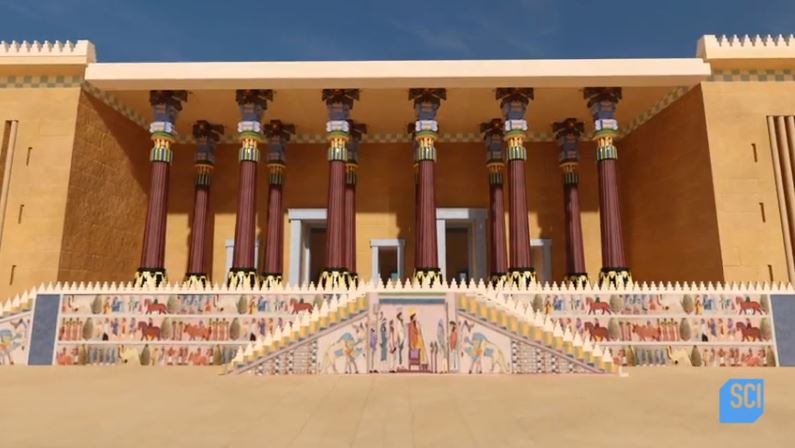 Unearthed is back on Science Channel and takes us to ancient Persia in Sunday’s incredible episode where researchers, scientists, and CGI recreate the stunning ancient city of Persepolis.

Before the British Empire and well before America ever existed, Persia—beginning in 1935, it is now called Iran—was kicking butt and taking names in the global empire department.

Unearthed delivers a lesson on how to view an empire and interpret the rise and fall arcs of global empires applicable across the globe.

In TV Shows Ace exclusive preview of Sunday’s fascinating exploration of a mysterious metropolis, a place so powerful they had no rivals at that time.

We hear from investigators and experts with unique access to the site and talk about the importance of restoring and protecting Persepolis, the ancient center of the world.

Together the Unearthed team unlocks the secrets of the empire and resurrects the king’s luxurious palaces, and reveals groundbreaking inventions the ancients mastered.

A new season of Unearthed

Unearthed is about uncovering hidden secrets and decoding the mysteries behind some of the world’s most iconic structures from ancient to the present day.

The ancient city of Persepolis is the capital of the first world empire, Persia. Unearthed takes us there in the kickoff of the series this Sunday. What can their experts reveal about the scale of this imperial powerhouse?

Mount Nemrut – a mysterious sky-scraping monument perched high in the Taurus mountains of southeastern Turkey. Giant decapitated statues surround an enormous human-made mountain summit. But why was Mount Nemrut built? And how?

Traveling worldwide to some of the most iconic sites, the series combines scientific investigations and expert insight with stunning CGI animation to unearth the hidden secrets behind these famed monuments and reveal how and why they were created.

For millennia, Iran was called Persia. The Persian Empire consisted of imperial dynasties that ran from the 6th century BC to the 20th century AD.

Initially, it was the Achaemenid Empire formed by Cyrus the Great in 550 BC, and after that, Sassanid, Safavid, Afsharid, and then the Qajar rulers.

In Unearthed, the Persian Empire is referencing from the Balkans and Eastern Europe all the way to the Indus Valley.

It was built on a half-artificial, half-natural terrace, replete with an enormous palace complex inspired by Mesopotamian models.

Now the ruins lay at the foot of Kuh-e Rahmat (Mountain of Mercy) in south-western Iran.  Unesco considers it a heritage historical site. On their site, the ancient city is described as a “gem of Achaemenid ensembles in architecture, urban planning, construction technology, and art.”

The city’s terrace was built in 518 BCE by Darius the Great, the Achaemenid Empire’s king. After him, the kings erected a series of palatial buildings, including the Apadana palace and the Throne Hall, also referred to as the Hundred-Column Hall.

According to Unesco, restoration work has respected the authenticity of the monuments, employing technology and materials in harmony with the original build.

Please tune in to see why the Shahs of Sunset cast of characters get their fierce Persian energy from!

Unearthed airs Sunday, May 2 at 9 pm ET/PT on Science Channel.

In addition to watching UNEARTHED on Science Channel, viewers can join the conversation on social media by using the hashtag #Unearthed and following SCIENCE CHANNEL on Facebook, Twitter, and Instagram.