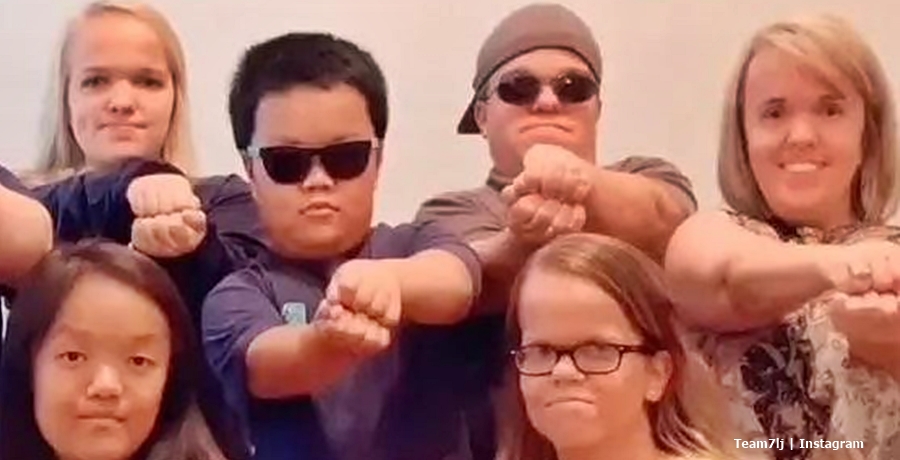 Amber Johnston and her husband Trent seem really tight after all the years they’ve known each other. Briefly, back in 2019, 7 Little Johnstons fans saw some tension between them. However, rumors of splitting and divorce soon died away. Every married couple goes through times of difficulty, after all. Now, after 26 years of “togetherness,” Amber gave Trent a lovely shout-out on Instagram.

This year when Valentine’s day came along, Amber took to her Instagram and shared photos of the two 7 Little Johnstons stars over the years. The post revealed that they hardly changed over the years. They really aged very well together, fans thought. At the time, she revealed that she and Trent met at high school. However, the invite to the event was for Trent’s friend. Nevertheless, they straight away felt a strong connection when they met up. In fact, four years later, they tied the knot.

Amber Johnston turned 42 years old in March this year and Trent gave her a lovely shout-out. The patriarch of TLC’s 7 Little Johnstons shared some photos of Amber and captioned them very nicely. He wrote, “Happy Birthday to this fabulous woman right here!” Back in Season 5, when rumors of divorce did the rounds, Amber admitted that they struggled a bit. However, she noted that they always work other as a team. Obviously, that worked for them as there are no signs of discord now. This week, she gave Trent a nice shout-out on social media.

On April 28, Amber Johnston took to her  Instagram and shared about the years they spent together. She admitted that sometimes things don’t always work out perfectly. Nevertheless, she said that she’d rather do life with Trent despite its ups and downs than with anyone else. Well, with dwarfism and five kids growing into adulthood, they probably faced many challenges in their lives. So, it’s nice to see that love wins out, TLC fans agree.

One TLC fan said to Amber Johnston, “Beautiful❤️❤️❤️ congrats.😍😍😍😍.” Plus, a lot of them sent in the “anniversary” congratulations. Another fan wrote, “You guys make the perfect couple😍Happy.” Actually, Trent and Amber became goals for other people who raise children and who face challenges.

While the show focuses on the challenges little people face in a big world, it also shows how the couple works as a team when raising their kids. Fans know that sometimes, raising kids requires some tough decisions and agreement between mom and dad.

What are your thoughts on Trent and Amber Johnston, who still seem tight after 26 years together? Do you agree that it looks like their marriage is still strong despite all their challenges? Sound off your thoughts in the comments below.