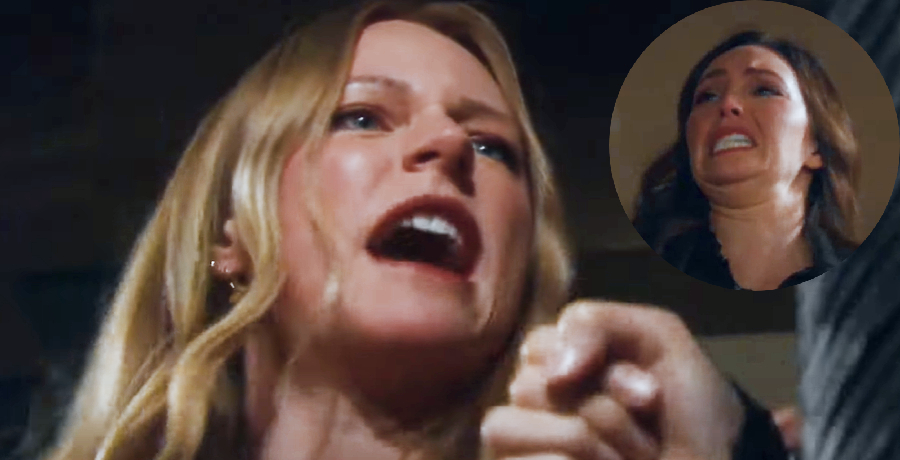 Days of Our Lives spoilers for the next two weeks, beginning Monday, April 26, through Friday, May 7, reveal Abigail Deveraux (Marci Miller) once again goes after her pregnant sister Gwen Rizczech (Emily O’Brien). Kristen DiMera’s (Stacy Haiduk) schemes are catching up with her.

Plus, Nicole Walker (Arianne Zucker) has a realization about the budding relationship between her besties Ava Vitali (Tamara Braun) and Rafe Hernandez (Galen Gering) on the NBC soap.

Abigail Deveraux and her half-sister Gwen Rizczech have yet another heated confrontation on Days of Our Lives. Gwen’s been working hard to make amends with her newfound sister and their shared father, Jack Deveraux (Matthew Ashford). However, that all came to a screeching halt when Gwen revealed she’s pregnant with Abby’s husband Chad DiMera’s (Billy Flynn) baby.

The latest Days of Our Lives spoilers show Abigail has a heated argument with her pregnant half-sister. Of course, it’s coincidentally at the top of a sprawling staircase. Abby tells Gwen she wants her and her baby out of her life. Then, Gwen loses her balance and tumbles down the stairs. Jack and Chad are in an area close to where the stairs end and see Gwen as she rolls down with Abby standing at the top in shock. Of course, Abby claims it’s an accident when her daddy and hubby question her. But of course, they’re unaware of the words the sisters exchanged just before the tumble.

DOOL spoilers tease that both Jack and Chad side with Gwen. Spoilers also predict Gwen loses her baby after this fall, and this latest incident forces Chad to make a tough decision about his marriage to Abby. Abigail Deveraux’s portrayer, Marci Miller’s real-life pregnancy was not written into her Days of Our Lives storyline. This latest incident sets the stage for Abby to head for inpatient treatment while the actress enjoys her time off for maternity leave.

Days of Our Lives spoilers know it was Nicole’s idea for her bestie Ava to move in with Rafe Hernadez. However, the seemingly happily married woman now finds herself jealous over the latest news Ava confides to her. Nicole learns Ava and Rafe shared a kiss. Of course, Nicole tries to play it cool and tells Ava she thinks it’s a  bad idea. She’ll probably tell Ava that Rafe is still carrying a torch for his ex-wife Hope Brady (Kristian Alfonso).

However, Days of Our Lives spoilers suggest the news of the kiss sparks the green-eyed monster in Nicole. Suddenly she realizes their relationship is getting under her skin. Her hubby Eric Brady (Greg Vaughan ), has been in the Congo for close to a year. Fidelity isn’t Nicole’s strong suit. Now with the news of Ava and Rafe’s kiss, Nicole’s forced to admit to herself she has feelings other than friendship for Salem’s top cop.

Days of Our Lives Spoilers: Kristen In Over Her Head

Days of Our Lives spoilers remind Kate Roberts yanked the Susan Banks wig off Kristen DiMera’s head. Now Kristen has to deal with another plot twist in her plan. Perhaps Kristen anticipated Kate being an issue cause she whips out a “Kate” mask after stashing away Kate. Now Kristen is parading around Salem as a newly single Kate after she dumps Jake.

However, Days of Our Lives spoilers show “Kate” is in over her head when Roman Brady (Josh Taylor) once again puts the moves on his ex-wife. Roman isn’t Kristen’s only issue. Once again, “Susan” makes a slip in front of Brady Black (Eric Martsolf) that threatens to bring her house of cards tumbling down for good on the NBC soap.