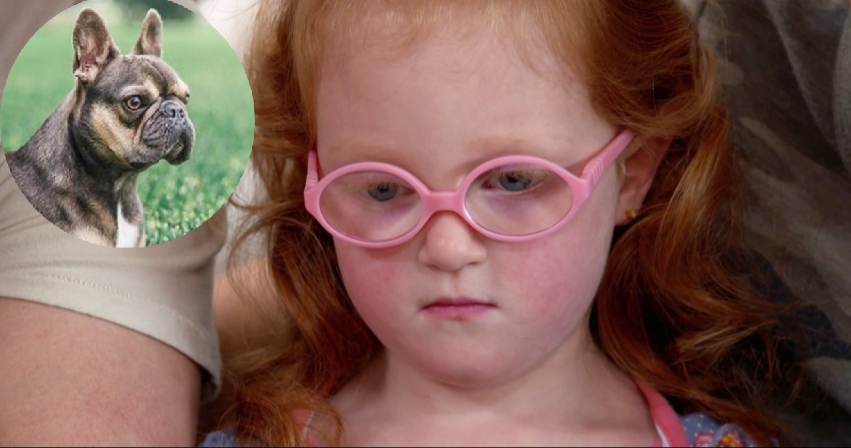 Busby dog Beaux arrived in the OutDaughtered family via Adam. The cute little Frenchie, a birthday gift, got a poor reception from Danielle Busby. Actually, fans really slammed her for her snarky attitude. However, the kids adored their “Bo Bo,” and their mom softened her attitude after a while. However, while he’s usually very good with the kids, he seemed particularly unimpressed with Hazel. Her dad, Adam snapped a photo and shared it with his Instagram followers.

Some fans felt angry with Adam when he brought in Beaux. After all, they saw that Danielle already struggled with coping with all six of her kids. However, others thought that Danielle made a mountain out of a molehill over the pup. On TLC tensions rose again, and much drama came from the network. Thankfully, Adam put his foot down with the network. So these days, fans don’t see so much ugly stress between the two parents. Anyway, in real life, Beaux soon won over Danielle’s heart as well.

‘OutDaughtered’: Danielle Busby Hated The Idea Of A Dog, But She’s Beaux-Dog’s Favorite

Busby dog Beaux ended up adoring his “mom” who loves him back. In fact, it certainly looks like she formed a special bond with the cute pooch. Once, fans laughed because they saw Riley blaming Bo Bo for cutting her hair. So, the cute dog is loved by the cute quints. Hazel, one of the cutest of all the quints also adores her little doggie. Fans love the way Hazel seems thoughtful and kind. Kind enough to comfort her sister Riley when they visit the dentist. So, she didn’t hurt Bo Bo, but he still seemed unimpressed with her on April 21.

On Wednesday, the photo that Adam shared of the Busby dog Beaux revealed Hazel looking very pleased with herself. The List reminds fans that Hazel’s the red-headed OutDaughtered quint. She’s “adorable,” “funny,” “sassy, and has a heart of gold.” And yes, in the photo she looked like she fully fit that description. Smiling sweetly, the cute quint proudly placed a stuffed toy on top of Bo Bo’s head.

Adam said that his daughter seemed “so proud” as she taught the Busby dog Beaux a “new trick.” However, as the OutDaughtered dad noted, “Beaux wasn’t as excited.” Some fans noted how patient the dog was with the quint. After all, he looked unimpressed, but he still allowed it. Meanwhile, others loved that Adam shared the photo as Hazel’s their favorite quint. One of them noted, ” Aww Hazel looks so proud and happy Beaux not so much 😂💙.” 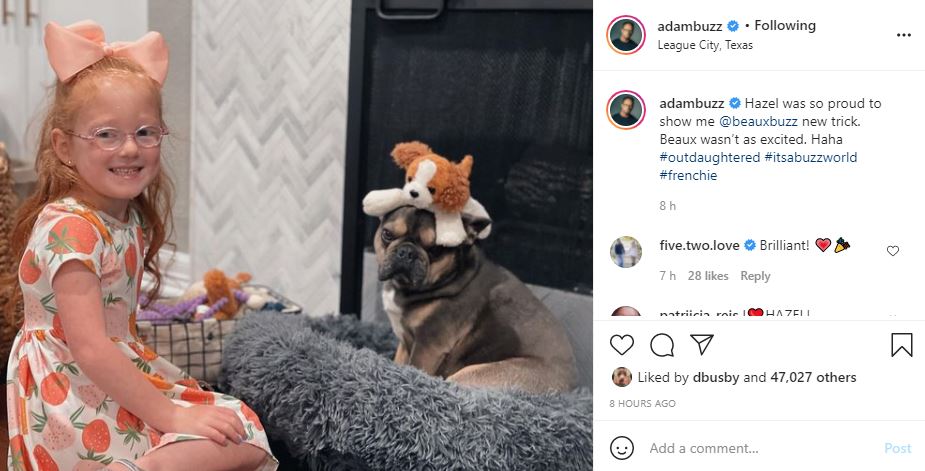 What do you think of the Busby dog Beaux looking so unimpressed with Hazel, but allowing her to plonk the toy on his head, anyway? Sound off in the comments below.