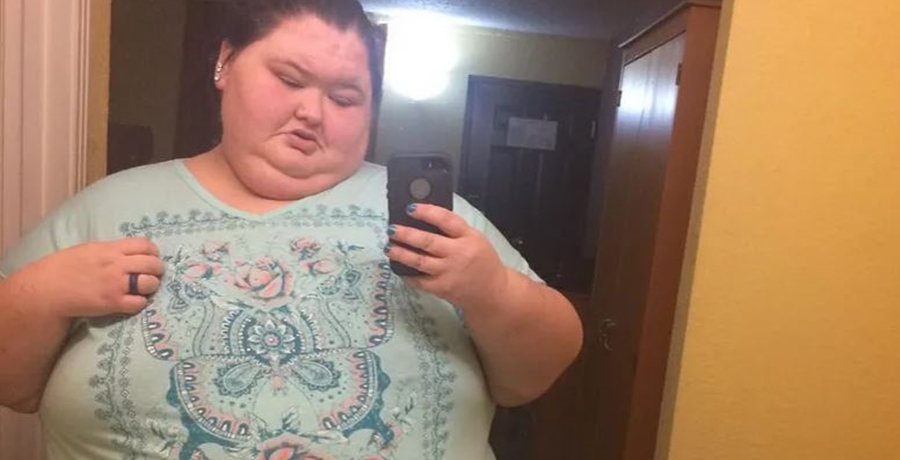 Amy Halterman lost a lot of weight and isn’t shy about flaunting herself in a polka dot bikini. Still larger than a lot of average-sized people, she’s rightly proud of her efforts so far. Recall, she weighed in at over 400 pounds when 1000-LB Sisters aired in Season 1. She worked hard and finally qualified for weight loss surgery at the end of Season 1 on TLC. On April 16, she took to her Instagram and revealed two comparison photos. They showed how much smaller her clothing size is now.

On Friday this week, The 1000-LB Sisters star took cute baby Gage for his first experience in a swimming pool. Fans saw that he splashed about while Amy held him securely. At one stage, he tried out a kiddie’s floating device while Amy and a friend hovered anxiously. However, the bulk of them revealed Amy sitting in the shallows with her baby. Mind you, when she posed for a photo with Michael, fans noticed how much weight she lost.

In March this year, we noticed that Amy Halterman inspired a lot of people who struggle with their weight. She advised fans not to set huge goals. Rather, she noted, little steps like setting a five-pound target for a week helped her get her weight down. However, TLC fans suspected that she might put her weight back on with her pregnancy. Indeed, in Season 2 of the show, that happened.

Does Amy Halterman Have Weight Loss Advice For Fans? [Exclusive]

Nevertheless, she shed a lot of that since Gage arrived. Now she posted two comparison photos, her weight loss seems very obvious.

1000-LB Sisters star Amy Halterman looked amazing in January last year, and fans applauded her back then. However, since then, she lost even more weight. Most moms who birth a baby struggle with resuming their pre-pregnancy weight. However, for Amy, the challenge seemed much more difficult. After all, her obesity threatened her life, so she needs to stay on top of it. Especially, as she really enjoys raising her son. With a road still unfolding before her, one day Amy might totally stun her fans as she came so far already.

The two photos came labeled by Amy Halterman as 5 x 1 and x1. TLC fans eventually figured out it probably related to clothing sizes, as in Extra Large 5 and Extra Large 1. In her caption, the 1000-LB Sisters star said, “Alot has changed, (sic).” One fan noted in the comments, “That’s amazing. And the best part is you look so much happier❤️.” Others also complimented her on her weight loss.

What are your thoughts on Amy Halterman flaunting her new clothing size? Are you amazed by the two comparison photos of the 1000-LB Sisters star? Do you agree that she looks much “happier?” Sound off your thoughts in the comments below.

Catelynn Lowell DRAGGED For ‘Twisted’ & ‘Disgusting’ Clickbait
Todd & Chase Chrisley Break Silence On Exploiting Lindsie Rumors
Travis Barker Cuts Kourtney Kardashian’s Hair: What Is Going On?
Chris Harrison Responds To Matt James, Rachael Kirkconnell Dating, Plus Is He Watching Katie?
Josh Duggar’s Arrest May Not Be The REAL Reason ‘Counting On’ Is Over