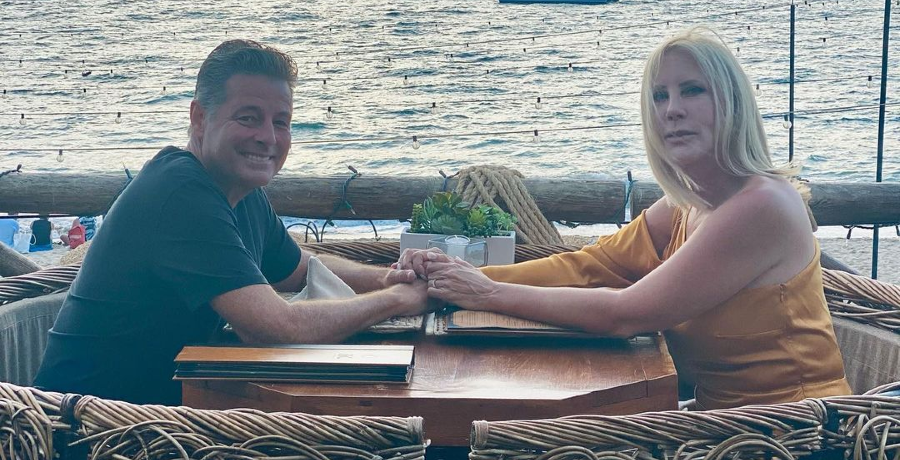 It’s an RHOC reunion. Vicki Gunvalson crashed Jeana Keough’s interview to set the record straight. The 59-year-old is sick of the rumors about her split from Steve Lodge. The rumor mill has gone into overdrive lately.

While she’s no longer on The Real Housewives of Orange County, she still has fans talking about her personal life. Fans haven’t seen Vicki and Steve together in a few months. The insurance #girlboss has managed to make headlines about their extended engagement. Just days after celebrating her birthday, fans wonder if she’s moved on with a much younger man.

Now, Vicki is dying to set the record straight.

On Wednesday, April 14, Vicki Gunvalson crashed Jeana Keough’s interview on Access. She wanted to address the persistent rumors that she broke up with her fiance to date a 23-year-old man. Jeana was in the middle of a conversation with two women, but that didn’t mean anything to the Bravo star. Vicki crashed the interview when she heard them talking about her.

Jeana calls the rumors “untrue.” Then, she remembered Vicki telling her something about “relationships being hard.” Jeana decided to text her friend to get the tea. She also said that she can’t imagine seeing Vicki with a 23-year-old because “they are idiots,” but on the other end, she can.

Vicki called Jeana because she got a “weird text from her.” The RHOC alum asked Jeana why she said that. Vicki confirmed that she’s still engaged to Steve Lodge and that they’re together in Mexico. Jeana responded with a resounding “Woo hoo!” and told the television personality that she would talk to her later.

“How do you like that? My girlfriend picks up the phone and even calls me all the way from Mexico?” Jeana told her guests. Both of them sat there speechless. That finally puts an end to the Steve Lodge split rumors for now. She has been desperate to set the record straight.

Vicki Gunvalson denied the rumors before

Vicki Gunvalson is still active on social media. She shares her life on an almost daily basis. One person that’s been missing from most of her posts is Steve Lodge, who doesn’t pop up much. Fans started to notice his absence and then the rumors swirled that the couple broke.

Then, came the rumors that Vicki was dating a man 36 years her senior. If the rumor was true, she would flaunt it everywhere. However, the entrepreneur debunked those rumors.

“In regards to the rumor that I am no longer engaged and that I am currently dating a 23-year-old,” Vicki previously told Celebuzz before adding a “LOL.”

“This is absolute pure and utter tabloid gossip that someone made up,” she continued. “If you’ve been following me, you would definitely know I am certainly not dating a 23-year-old. This allegation is so ridiculous I actually laughed when asked about it at first. Clearly, the press must be bored today.”

She also denied the rumors in a post captured by Comments by Bravo on Sunday, April 11. “Not true!!!” she wrote in the comments section of the Instagram post. Celebrity Instagram account Deuxmoi first reported that claims that she “is not engaged anymore” and she is “dating a 23-year-old dude.”

Vicki and Steve pushed back the date of their wedding day. Since then, the couple has been spending time in Puerto Vallarta, Mexico, where she purchased a new home in 2020. There is no photographic evidence of the reality star with a younger man. In the meantime, The Real Housewives of Orange County is on pause after 15 seasons.

Busby Family Share Big Plans For Next Week’s Summer Break Excursion
‘General Hospital’ Rumors: Is Hayden Barnes’ Returning To Port Charles?
Kourtney Kardashian Spills Details On Sweaty Date Night With Travis Barker
Was Tammy Slaton TRYING To Kill Herself In Deleted Instagram Post?!
Is This A Sign ‘Bringing Up Bates’ Will Be Canceled?