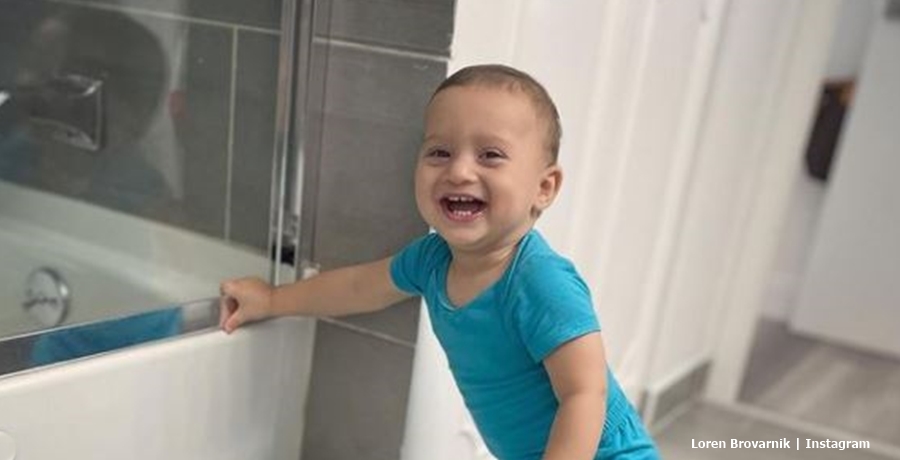 90 Day Fiance‘s Loren & Alexei welcomed their baby at South Beach’s Mount Sinai Hospital. Arriving a bit early Shai seemed a little small. However, he soon made up for that and became a strapping toddler. Nowadays, fans adore little Shai and TLC fans often see photos of him on his mom’s social media. Now one year old, Shai celebrated his birthday with a lovely cake.

On April 15, Loren and Alexie took their baby home. Delivered safely on April 14, he only weighed “5 pounds and 10 ounces,” we reported. He measured in “at 19 inches.” The slightly premature baby went home without fans knowing what they called him. In the meantime, everyone knew him as “Baby Brov.” When they revealed his name, Shai, fans heard that it means “gift” in Hebrew. Certainly, he looks like a gift to his proud parents. Meeting all his milestones, fans wondered if he started walking yet.

We reported that 90 Day Fiance’s Loren and Alexei’s baby looked very close to walking in mid-March. Back then, Loren shared a clip that revealed he managed a few steps albeit with a bit of help from his dad. Well, it looks like he might manage on his own now. Three days ago, Loren shared a photo of him standing next to the bath. In fact, he seems fine standing up on his own. At least, if he hangs on for support.

Shai Brovarnik Is A ’90 Day Fiance’ Fan-Fave – Is He Walking Yet?

On Wednesday, some of the cutest photos yet came on the occasion of Shai’s first birthday. 90 Day Fiance‘s Loren shared them, and they look awesome TLC fans agree. The pic below came from a professional photographer.

Beautiful photos of Shai on his birthday

90 Day Fiance‘s Loren and Alexie certainly made the most of the momentous occasion. Fans agreed that Shai looked so adorable, as he wore a crown and a bowtie. Shirtless, the cute kid sported some striped short pants, and nothing else. In her caption, Loren called him “Mr. ONE-derful! Shai.” She also noted that he’s a “gift,” and they love raising him. “We love you more than [the] amount of stars in the universe!” she added.

As 90 Day Fiance‘s Loren asked fans to send in their best wishes, plenty of them complied. Even without asking, no doubt plenty of people would have done that anyway. One fan wrote, “Happy bday cutie pie XX May God bless you always.” Meanwhile, others talked about how “cute” he looks. Also, some other members of the TLC cast sent in their congrats.

What do you think of 90 Day Fiance’s Loren and Alexie’s little boy Shai looking so fine on his first birthday? Sound off in the comments below.