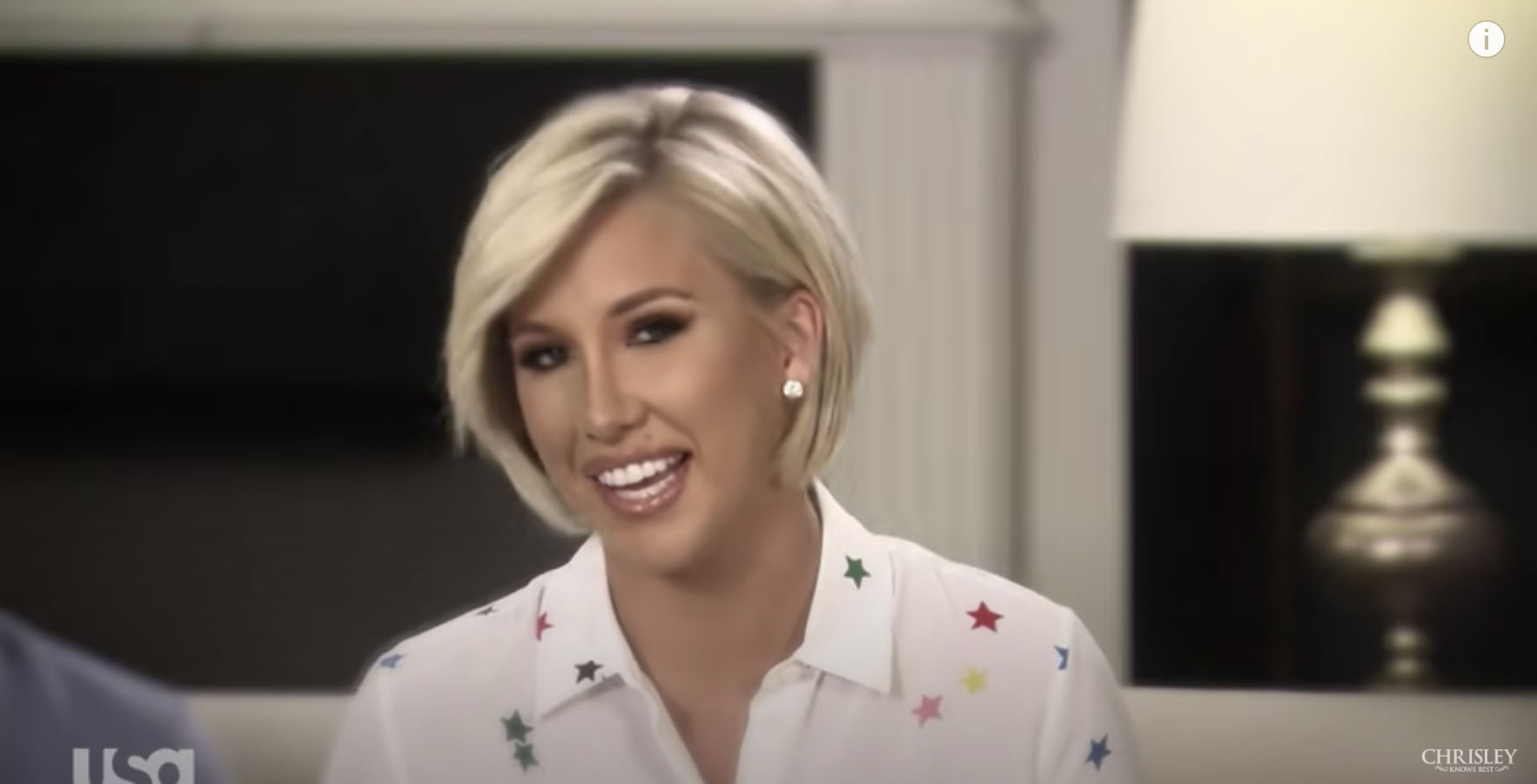 Season 8 of Chrisley Knows Best may be over, but that doesn’t mean that the Chrisley’s stop connecting with their fans. Weekly, Todd and Julie Chrisley take to their podcast, Chrisley Confession to share updates about the family and answer fan questions. However, this week is a little different. Todd Chrisley isn’t present. Unfortunately, he got food poisoning on his birthday. Lucky for listeners, Julie is joined by her daughter, Savannah Chrisley on the most recent episode of the podcast.

As expected, Savannah Chrisley speaks about her cosmetics line, Sassy by Savannah while she’s on the podcast with her mom. As many fans notice, she hasn’t given definite dates for when she’s releasing and relaunching products on Sassy by Savannah’s website. However, this is for a good reason. Ultimately, she shares that COVID pushed back some of her timelines. Already a successful businesswoman, Savannah shares why there isn’t an exact date. “I don’t want to give an exact date because I was supposed to launch stuff in March and it didn’t happen because of shipping delays.”

As Savannah goes on to talk about next week’s launch, she uses the word hopefully. Savannah emphasizes the word hopefully when she says, “Hopefully next week I’ll have more products launching next week.” As the podcast continues, Savannah and her mother, Julie go on to speak about what you can expect of the upcoming release/relaunch if things go according to plan.

She keeps it real about her product launch expectations

To emphasize the demand for her products, Savannah tells a story to illustrate how she depleted her personal stock of products. “I had like a whole stock of products for myself and anytime I would come across someone – like I met someone at the grocery store that loved my stuff and wanted it, but it was sold out. So, I went home, got some of my stuff, brought it back to em, and then I realized that I’ve given all of my personal stock of my products away.”

Nearly devastated, Julie and Savannah share that they’re out of Sassy by Savannah mascara. Savannah shares how she was reluctant to switch from her original go-to to her own product. However, unlike her original go-to, the formula for her mascara leaves no fallout and layers well. “At first I was kind of hesitant about it because I liked what I liked before,” shares the young entrepreneur. “And then, I created something and I was like ‘Holy cow! This is amazing’,” shares Savannah.

She’s completely transparent with her fans

Unfortunately, Savannah shares, “We’re kind of having some issues with bringing it back.”  However, Savannah is doing everything within her power to bring back her beloved mascara. When the launch happens, the mascara is “undetermined right now,” according to its founder.

Then, Julie asks the question that everyone’s been dying to know the answer to. “The original drop of your product… I mean I’m talking about the full-face palette, the lips, the eyes…will everything be available even with the new stuff comes out?”

Sadly, some fans aren’t going to like Savannah’s answer. “Not everything.” Specifically, she says, “For instance, the eye kits. They are not coming back as of right now,” shares the 23-year-old. However, she encourages people to go to the Sassy by Savannah Instagram and tell us how much “you want it, then maybe I can get it back.” Ultimately, she shares that she’s “really pushing for the black eye kit.”

Old Sassy by Savannah favorites are coming back, well most of them, anyways

Additionally, Savannah shares that a few of the lip kits aren’t coming back. However, she doesn’t specify which ones. “Nashville Nights is definitely coming back. Along with four new ones [lip kits].” She goes on to give another vague timeline of “within the next four months, probably,” for new products. The Growing Up Chrisley star lists four new lip kits, a bronzer, and eyebrow kits. From the sounds of it, that doesn’t seem like that will be all for the Sassy by Savannah product line.

Are you going to monitor Savannah Chrisley’s social media to get your hands on some Sassy by Savannah products? Let us know in the comment section below. Come back to TV Shows Ace for more Chrisley Knows Best news. Make sure to listen to Chrisley Confessions weekly on Wednesdays/Thursdays for the latest news straight from the Chrisleys.