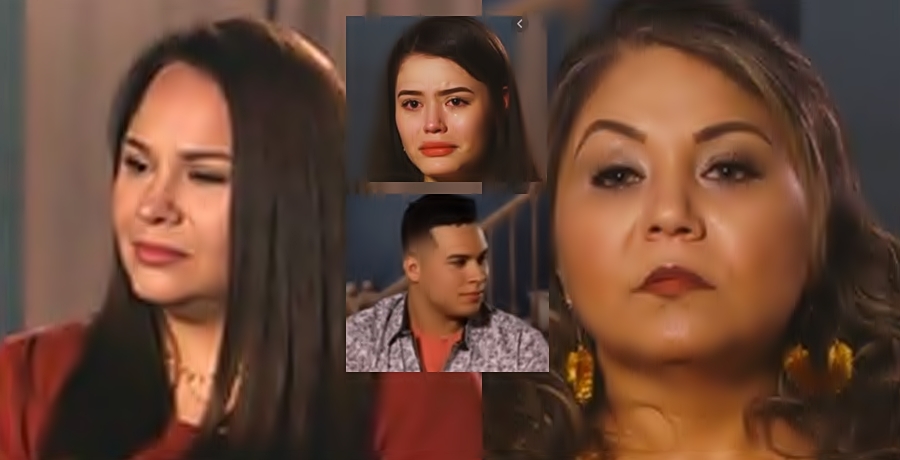 Liliana Cantu became an instant villain on Unexpected. But, in a feud between Michelle and Myrka, did Liliana inadvertently break her NDA? Trying to take a middle road between Ethan’s mom and Myrka, she said something that Myrka claimed she couldn’t talk about. As fans know, TLC seems very strict about non-disclosure. However, things heat up and emotions run high between the cast.

Unexpected often brings a lot of drama which makes for good TV ratings. When Myrka and Ethan arrived on the show, people liked Myrka a lot. Actually, they felt really terrible as her mom, Liliana threw her out of the house. Things escalated when Ethan claimed his mom, Michelle later booted them out as well. Details remain unclear, and in her Instagram during a Q&A, we reported that Myrka said she couldn’t answer a question. A fan asked her why, after her mom kicked her out, Myrka “looked for her.” Well, Myrka explained that not everything gets shown on TLC.

Liliana Cantu, according to Myrka “never” totally disappeared from her life. However, another question also arrived. That one might indicate whether her mom just broke her NDA. An Unexpected fan asked her where she went after Ethan’s mom kicked her out of her pace. In her reply, Myrka said, “I can’t say anything until after the tell all airs.” So, she can’t bring clarity right now. Well, in her effort to calm things down between Michelle and Myrka, Liliana strongly hinted at what happened the night Michelle lost it with her daughter.

Too much info emerging in the feud, broken NDA?

Liliana Cantu, Myrka, and Michelle all took to social media, according to a lengthy report by Starcasm. They explained between various Facebook groups and Instagram, Myrka was really upset with Michelle Ybarra. In a Q&A, Myrka talked about how Ethan’s mom doesn’t see baby Attalie. Plus, Myrka doesn’t miss her. A fan thought that sounded rather ungrateful as Michelle took Myrka in. Snarking, Myrka reminded the fan that Michelle kicked her out with her “newborn baby in the middle of the night.”

Cutting a long story short, Liliana Cantu reacted when Michelle posted a lengthy rant about Myrka. The Unexpected mom called Myrka “childish” and accused her son and Myrka of telling falsehoods. Additionally, she called Liliana “toxic,” and claimed Myrka was “conditioned” to that sort of thing. By the way, she also claimed that Myrka’s story of being chucked out at “2 AM” is a “stretch.” Anyway, she backed off the ugly situation and later posted a slightly reconciliatory message.

Liliana talks about Myrka and gives more details on what happened

Sounding a bit irritated with her daughter for taking dirty laundry onto social media, Liliana Cantu chided her for being “disrespectful.” However, she also gave more details about what went down. Apparently, Myrka called her cousin who fetched her from Michelle’s place. Liliana only found out later, when Myrka sent her a text. Myrka ended up at Liliana’s house with the baby. Meanwhile, Ethan sometimes slept at his mom’s place but spent his days in Liliana’s apartment.

Whne Myrka’s dad offered her accommodation, they couldn’t stay there for long as Charlie moved house and it needed some renovations. Liliana Cantu claims that she knows none of the details about the fight between Michelle and Myrka. However, she knows Myrka was in a bad temper that day. Apparently, Liliana clashed with her over her father. While Starcasm shared all the details of what Liliana said, they admit they never tracked down the original post or the source. So, for now, it should be taken with a pinch of salt. Still, it might make fans of TLC wonder if her reveal meant she broke part of her DNA. After all, Myrka said she couldn’t say what happened when she left Michelle’s house.

Sound off your thoughts about the Liliana Cantu, Michelle Ybarra, and Myrka feud in the comments below.

Did ‘Duck Dynasty’ Alum Sadie Robertson Give Birth?
Ariadne Joseph Releases Texts & Emails Showing The Snowden’s History Of Abuse
‘This Is Us’ Season 6 Confirmed as the End: No Season 7 for the Pearsons
Khloe Kardashian Struggles With Surrogacy Amid Tristan Thompson Cheating Scandal
‘Stunner’ Jill Dillard Shares Photos As She Models New Swimsuits