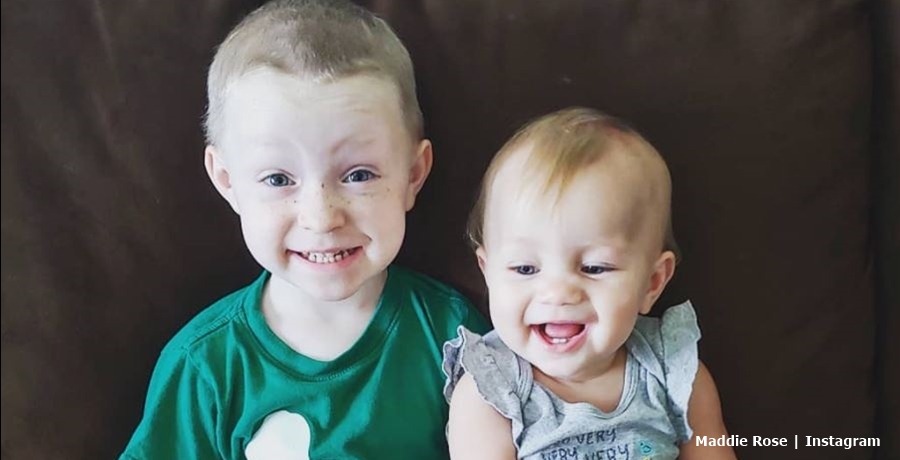 Maddie Rose Brown seems besotted with her two kids, Axel and Evie. And who can blame her? The Sister Wives star and her husband Caleb raise two adorable children, TLC fans think. Living in North Carolina, the family enjoys the warm weather at the moment. So, when Maddie spotted a warm-weather treat in the park, she couldn’t resist spoiling the little ones a bit.

Tired of all the drama between Kody Brown’s wives in the current season of Sister Wives? Well, Enjoy the lighter side of his family. There is seldom drama over on Maddie’s Instagram. Actually, she shares some very heartwarming photos of her children. Certainly, fans appreciate that she shares her life with them and they never tire of her photos of the kids. Axel seems partially generous with his little sister and Maddie just loves his attitude. One story she shared melted her heart. Sweetly, her son climbed into bed with Evie and cuddled her after a good feed.

Maddie Rose Brown shares the milestones her kids meet and she seemed very happy when they started playing nicely together. Axel just reached the age where can play without becoming too possessive of his toys. Often, he keeps his sister amused for hours as he lets her play with him. Very often, fans see nice photos of the two kids enjoying a trip to the park. Or, they might stay home in cooler weather and look at picture books together.

Monday, April 5 turned out a nice day, so once again, she took her two children along to the park. There, they enjoyed a warm-weather treat.

Maddie Rose Brown seems very lucky that her kids play together and don’t seem to mind sharing. This week, their special treat in the park revealed how nicely they do that. In the photo that she popped up on Instagram, Axle and Evie both sat on the grass. Alex looked cute in his blue tee and short pants. Meanwhile, Eve wore eye-catching pink. Alex held the treat and Evie dipped her own spoon in it.  In her caption, Maddie the how the scenario made her happy.

Maddie Rose Brown commented in her caption: “They shared so well…which makes this momma heart happy.😊💛.” Additionally, she said, “They were selling snow cones at the park today, so naturally I was suckered in.” Well, one fan told Maddie, “Always get suckered in! Those moments are so joyful and make such sweet memories.” As usual, loads of comments about the “cute” and “precious” kids went Maddie’s way.

Some fans of Maddie Rose Brown live outside of the USA, so they don’t know what a “snow cone” is. Nicely, other Sister Wives fans explained about the shaved ice and syrup treat. So, it looks like Axel and Evie just shipped a tasty warm-weather treat idea overseas!

Wait, What? Does Isabel Roloff Plan To Raise Her Baby In A Van?
‘Love Island USA’: Flo Wants To Be The Only Girl On Will’s Lips
Tori Roloff Shares ‘Touching’ Message Amid Heartbreak
‘DWTS’ Pros Sasha Farber And Emma Slater On Parenthood Possibility
‘Days Of Our Lives’ EXCITING Comings & Goings: Johnny DiMera All Grown Up – Rex Brady Back